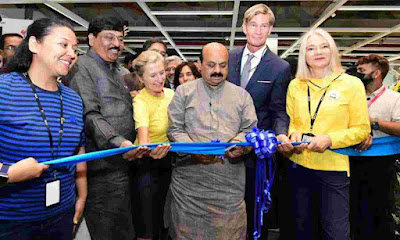 * Home decor enthusiasts are in for a good news as Bengaluru is all set to get its first IKEA store on June 22. Furthermore, it will be connected to the Nagasandra metro station.

Swedish home furnishings retailer Ingka Group's unit IKEA India said on Tuesday that it will open its first store in Karnataka's Bengaluru on June 22. The huge furniture store will be connected with the Nagasandra metro station, a statement from IKEA India read.

The development occurred after Karnataka's Chief Minister Basavaraj Bommai met the CEO of Ingka, Jesper Brodin, at the World Economic Forum meet in Davos, Switzerland, where they are said to have held talks about the store's opening.

Brodin and Bommai are both attended the inaugural event of the store's launch in Nagasandra on June 22. IKEA  India has also stated in the release that Anje Heim will be the Market Manager for the Karnataka market.

“IKEA aims to offer home furnishing solutions that match the aspirations and dreams of the many people of Bengaluru for a better everyday life. IKEA Nagasandra will serve as a one-stop destination for all your home furnishing requirements,” Heim told reporters.

The IKEA Nagasandra store will be 4,60,000 square feet big and will be spread over 12.2 acres of land. It is set to host more than 7,000 reasonable, great quality, sustainable and well-designed home outfitting items, according to the statement.

The store is also going to be kid-friendly as it will have a large play area for children called 'area 'Småland'. Moreover Bengaluru's IKEA is also expected to open an eatery that can sustain a footfall of 1000 at a time and a bistro serving a blend of Swedish and Indian rarities. IKEA had begun its online business venture in Bengaluru last year, with a shopping site and an app.

Posted by editor-manu-sharma at 4:20 PM