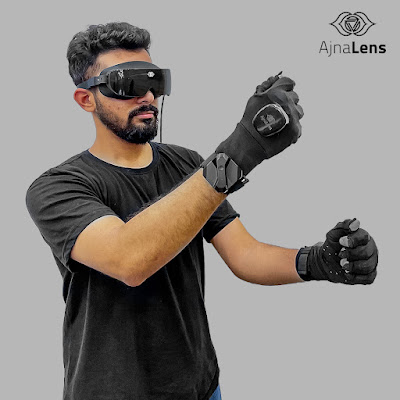 AjnaLens, a Mumbai based hardware and software company has become the first Indian company to launch ‘Made in India’ Haptic Gloves, named as ‘AjnaSparsh’. The one-of-its-kind gloves allows the user to intuitively interact with virtual objects in the Metaverse. The gloves are offered as a training tool along with the AjnaXR Station 2.0. Corporate giants like Vedanta are readily adopting this technology to train and upskill their workforce for better results.

“Every complex skill has its own set of tools that simplifies the learning process. Similar is the case with VR training. Attaching sensors on industry-graded tools do offer a sense of realism in the virtual world, but it still limits the scalability of the system. This inspired us to create AjnaSparsh, a unique pair of haptic gloves that allows users to touch, hold and feel the virtual objects in the Metaverse as they would in the real world. The right amount of pressure is induced on parts of the hand that are touching the virtual object, simulating the feeling of real touch. This leads to better hand, eye and brain coordination and sharpens cognitive skills to perform better.” said Abhishek Tomar, Co-founder & CTO, AjnaLens.

“Designed with utmost precision, AjnaSparsh is comfortable and lightweight to wear for an extended period. The sensors embedded allow force feedback and highly accurate motion tracking. Be it pressing a button, gripping a tool or throwing a ball, the gloves can replicate exact sensations in the virtual world. We are continuously working to upgrade the gloves and add new features like interactions with holographic avatars” he added.

The company aims to deploy the AjnaSparsh and train 50,000+ students by the end of the year.

Named after ‘Ajna’, the sixth chakra or the third eye which activates ‘intuitive vision’, AjnaLens is a Mumbai-based company making immersive augmented, virtual and mixed reality devices and software solutions for Defence, Enterprise and Skilling sectors. It is the first and only XR hardware OEM to manufacture AR/VR glasses in India.

The impact-driven startup is on a mission to unlock human potential by empowering them with augmented intelligence. In November 2014 at IIT Bombay, AjnaLens was established with a purpose to foster inclusive development in society by empowering people at the grassroots with the right tool for this decade - a ‘holographic computer’. It empowers and enables humans into perceiving and doing what is beyond their capabilities by seamlessly connecting the digital world with reality.

AjnaLens has filed 15+ National and International patents in augmented reality and allied fields. The company has won accolades like the Most promising startup by ECLINA Defennovation for cutting-edge innovations. AjnaLens is a growing family of 50 people, inviting bright minds to join their vision.

Posted by editor-manu-sharma at 1:10 PM