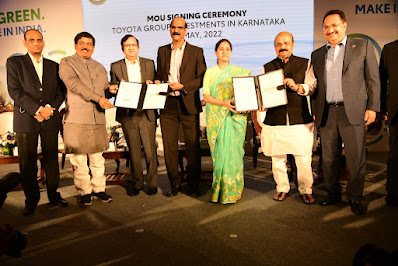 * Promote ‘Atma Nirbhar Bharat’ to manufacture for India and the world

The Investments are focused towards ‘Greener Technologies’ and ‘Make in India’ (Go Green. Make in India)

In its effort to contribute to the country’s vision of “Make in India” and to enable a faster reduction in carbon emissions, out of total investment of INR 4,800 crores, Toyota Group of Companies that constitutes of Toyota Kirloskar Motor and Toyota Kirloskar Auto Parts today announced their Memorandum of Understanding (MOU) with the Government of Karnataka to invest INR 4,100 crores. This announcement coincides with Toyota Kirloskar Motor’s 25 years of successful journey in India, by winning the hearts of millions of happy customers.

In-addition to boosting the local manufacturing eco-system, the new development will provide an impetus to employment generation and local community development. This investment will also spur the growth of local supplier base and hence result in higher investments and further job creation.

As part of the MoU, Toyota Group of Companies will systematically invest towards making India a self-reliant manufacturing hub, thus contributing towards the Government’s Make in India and Atma Nirbhar Bharat mission. The investments are aimed at promoting greener technologies that will help lower dependence on fossil fuels and mitigate carbon emissions. This investment will also enable local production facilities to build electric powertrain parts and components, thereby cater to the electrified vehicle manufacturing in India. As a part of the Toyota Environmental Challenge 2050, Toyota will continue to focus on reducing carbon emissions in a holistic manner going beyond tailpipe emissions to address manufacturing and lifecycle CO2 emissions in order to realise its carbon neutrality goals by 2050, as announced earlier.

Speaking at the auspicious occasion, Hon’ble Chief Minister of Karnataka, Shri Basavaraj Bommai said, “Our aim is to build ‘New Karnataka for New India’ by creating new 21st century industrial townships and corridors. As a state committed to sustainable development and contributing to the nation’s progress, we want to make Karnataka a global supply-chain and manufacturing hub under our ‘Build for the World’ mission. This MoU with Toyota Group of Companies is a huge stride in this regard, and Karnataka Government is confident of Toyota’s commitment towards sustainable growth and local manufacturing quality for Karnataka’s growth and development. Karnataka being the hub of electric vehicles, welcomes this MoU which adds another feather to State’s cap as leader in this sector”.

Since its inception, Toyota has been passionate and committed to build a stable, sustainable, and competitive local supply chain and has taken significant efforts in promoting localization of auto parts and components in line with Government’s ‘Make in India’ mission. The Group has invested in strengthening and increasing supplier base through consistently partnering with them to enhance their capacities and capabilities by sharing Toyota best practices, efficient processes and skilling of manpower, by imparting world-class training program to enhance the production excellence with high quality standards.

On upscaling the skill levels at suppliers, Toyota spent 40,000 man-hours every year to enhance processes through system, management, training, and hardware development. Further, another 8,500 man-hours are spent per year on suppliers’ people development.

Speaking on this occasion, Mr. Vikram S. Kirloskar, Vice-Chairman, Toyota Kirloskar Motor said, “Toyota is committed to enhance the pace of electrification strengthen domestic production with ‘Make in India’. Today’s MoU signing with the Government of Karnataka, in the gracious presence of Hon’ble Chief Minister Basavaraj Bommaiji and all dignitaries, is a very important milestone in terms of ushering in large-scale investment to make deeper cuts in carbon emissions, higher employment generation, creating local manufacturing hub not only for domestic needs but also for global markets, local community development and advancement in innovation. I believe that such investments are needed to provide technologically viable and economically competitive alternatives to fossil-fuel-intensive technologies in vehicle mobility space.

As a part of our philosophy, we always conduct deeper studies, analyse and explore multiple technological pathways that are best suited to optimally achieve the national goals on lowering dependence on fossil fuels, make India truly self-reliant, reducing carbon emissions and creating jobs. Toyota remains committed to serve our nation and the community where we operate.”

Toyota believes that the choice of technologies for achieving our national goals should be practical, sustainable, best suited for unique local conditions that helps to realise the transition in the fastest possible manner. Thus, while our long-term decisions are shaped by our Global environment challenge of achieving zero carbon emissions by 2050, our immediate technology decisions are influenced by our desire to achieve maximum immediate societal & environmental benefits, which in turn is largely determined by, the local energy mix of the country, infrastructure readiness as well as customer acceptance in line with our belief of ‘Leave No One Behind’.

These companies have so far invested Rs. 11,812 crores and employ more than 8,000 people. Over the years, the group has consciously adopted sustainable business practices and transforming from a carmaker to a mobility company.

Toyota believes in holistic approach and aims to strongly contribute to the State and country’s sustainable growth, as we are stepping into the greener future. Toyota is confident in creating an electrified manufacturing hub in India, thereby achieve our goal of delivering ‘Mass Happiness to All’.

Posted by editor-manu-sharma at 2:47 PM