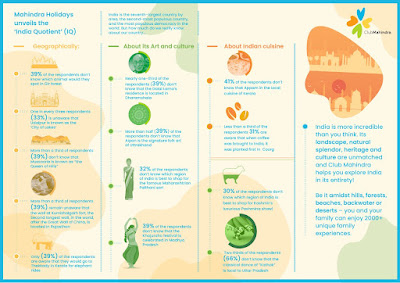 Indians’ surprising lack of knowledge of our own country, its diversity, vastness, culture, heritage, and cuisines was revealed in new research published by Mahindra Holidays. According to the light-hearted ‘India Quotient’[1] study, 60% of the respondents admit that they don’t know much about Indian history, culture, geography/destinations, nature, food, etc. The research was commissioned to mark Mahindra Holidays’ 25 anniversary milestone, and highlight the depth of experiences available to local travellers and tourists across the country.

The India Quotient, which indicates the knowledge and awareness of different facets of India, appears to be the lowest in cuisine. In fact, less than a third of the respondents (31%) are aware that when coffee was brought to India, it was planted first in Coorg.

Our research also revealed people’s low awareness of Indian art, culture, and heritage. For instance, more than half (55%) of the respondents also don’t know that Aipan is the signature folk art of Uttrakhand, more than a third (39%) of the respondents don’t know that the Khajuraho festival is celebrated in Madhya Pradesh, and nearly a third (32%) don’t know Maharashtra is the best place to shop for the Paithani sari.

The same trend is observed in terms of Indians’ geographical knowledge of our country. To illustrate, Gir is the only natural habitat of world popular Asiatic Lions[2], and yet, more than a third of the respondents (39%). One in every three respondents (33%) is unaware that Udaipur is known as the ‘City of Lakes’ and more than a third of respondents (35%) remain unaware that the wall at Kumbhalgarh Fort, the second-longest wall, in the world, after the Great Wall of China, is located in Rajasthan.

Kavinder Singh, Managing Director & CEO, Mahindra Holidays & Resorts India Limited, explained, “There has been an exponential rise in the local tourist visits, which was seen from the year 2000 to the present across the country[3]. As people explore India, observe iconic Indian monuments and experience unique culture and cuisines of different states, they grow more curious about other aspects of India they don’t know about and become eager to raise their ‘India Quotient’. For instance, two-thirds of the respondent (66%) seek out local cuisines when they are travelling with family, however, 41% of the respondents don’t know that Appam is the local cuisine of Kerala.”

“Club Mahindra has been the preferred choice for family holidays for over a quarter century, and in line with our campaign of ‘We Cover India, You Discover India’,  we aim to keep adding resorts and experiences across India to help our guests experience all the hidden treasures our diverse nation houses. Each of our properties offers a wide selection of exciting activities, and we are sure that they will delight our guests and help them create truly memorable moments.”

The study also revealed some interesting insights about family dynamics while people are on vacation:

Posted by editor-manu-sharma at 6:44 PM