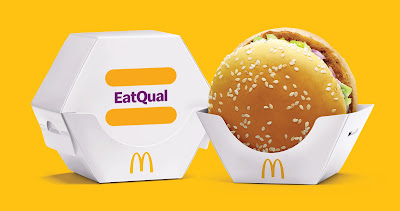 McDonald’s India (West and South) has yet again reinforced its commitment to fostering inclusion through its latest campaign. The iconic brand has launched a heart-warming brand film created by DDB Mudra that highlights how small innovations can go a long way in making the world more equal for everyone. The latest campaign showcases the role that the McDonald’s EatQual packaging plays in addressing one of the many challenges that people with limited upper limb mobility face in their everyday lives. The brand has reiterated that it aims to extend the EatQual platform to launch meaningful initiatives aimed at promoting inclusion across gender, languages and disabilities.

The film opens to a kid trying to do various day-to-day activities such as trying to play a guitar, doing a craft project, trying his hand at blocks, playing video games    using only one hand, and struggling at each one of those. It then shows him walking up to his friend who has only one upper limb, with two burgers – one in the regular packaging and one in the EatQual packaging. It closes with both of them biting into the burger, with his friend being able to hold and have the burger with ease, in the EatQual case.

The brand film showcases a child’s curiosity to explore the world as they see others experience it. The kid after trying a host of activities realizes that eating a McDonald’s burger is one of the few experiences that he and his friend with limited upper limb mobility can share easily.

Speaking about the EatQual initiative, Arvind RP, Director – Marketing & Communications, McDonald’s India (West and South) said, “According to the World Health Organization, around 15% of the world’s population lives with some form of disability. And yet, the world just isn’t made for them. EatQual stems from this fact. It is an inclusivity platform that we will continue to build. The EatQual packaging marks just the first step in that direction. We aim to launch a host of new, meaningful innovations to make the McDonald’s experience easy for everyone.”

Talking about the campaign, Pallavi Chakravarti, Creative Head DDB Mudra West said, “This year, McDonald’s has renewed its commitment to inclusion by continuing to promote the EatQual pack. The world doesn’t treat everyone the same - most things are designed to cater to the able-bodied, as the protagonist of our campaign discovers. So, while the idea of a pack that enables people with limited upper limb mobility to enjoy their burgers with dignity is not a life-changing one, it’s an important one. Because this small step alters an experience for the better - an experience that most of us take for granted. And for some of us, it brings a previously unattainable pleasure comfortably within reach. Sometimes, no, oftentimes, it’s the little things go a long way in levelling the playing field for us all.”

McDonald’s restaurants in West and South India are owned and operated by Westlife Development Limited (‘Westlife’). The company announced the launch of the EatQual packaging last year on the occasion of International Day of People with Disabilities. The packaging was developed in collaboration with an NGO that has been working towards the betterment of the specially-abled community for over 50 years.

Westlife has been taking definitive steps to promote inclusion across their restaurants and make the McDonald’s experience easy and enjoyable for everyone. The company has made many of its restaurants accessible for the specially-abled by installing ramps wherever possible and has made the restrooms wheelchair-friendly. The launch of EatQual is yet another step by the brand to foster inclusiveness.

Westlife Development Limited (BSE: 505533) (WDL) focuses on setting up and operating Quick Service Restaurants (QSR) in India through its subsidiary Hardcastle Restaurants Pvt. Ltd. (HRPL). The Company operates a chain of McDonald’s restaurants in West and South India, having a master franchisee relationship with McDonald’s Corporation USA, through the latter’s Indian subsidiary.

HRPL is a McDonald’s franchisee with rights to own and operate McDonald’s restaurants in India’s West and South markets. HRPL has been a franchisee in the region since its inception in 1996.

HRPL serves over 200 million customers, annually, at its 310 (as of September 30th, 2021) McDonald’s restaurants across 42 cities in the states of Telangana, Gujarat, Karnataka, Maharashtra, Tamil Nadu, Kerala, Chhattisgarh, Andhra Pradesh, Goa and parts of Madhya Pradesh and the Union Territory of Puducherry and provides direct employment to close to 10,000 employees. McDonald’s operates through various formats and brand extensions including standalone restaurants, drive- thrus, 24/7, McDelivery, McBreakfast and dessert kiosks. The menu features Burgers, Finger Foods, Wraps, Salads and Hot and Cold Beverages besides a wide range of desserts. Several of the McDonald’s restaurants feature an in-house McCafé.

The pillars of the McDonald's system – Quality, Service, Cleanliness and Value – are evident at each of the restaurants that HRPL operates.

Posted by editor-manu-sharma at 7:12 PM