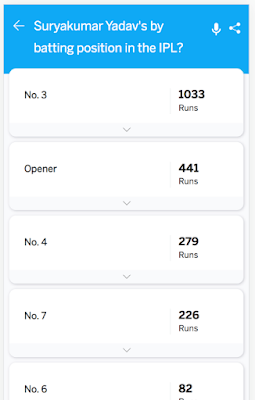 * The new service called AskCricinfo enables fans from across the world to get info on players, stats, and matches with natural language queries on any IPL season, T20 World Cup & other major T20 leagues played around the globe

Cricket is the second most popular sport in the world and its 2.5 billion fans have an insatiable appetite for stats and trivia about matches and players. Querying that massive volume of cricket data just became easy with this innovative application from ESPNcricinfo. The AskCricinfo service will enable fans to simply ask natural language questions (typed or spoken) to get answers. For instance, one can ask, “which team hit most sixes in power play in IPL 2021?” or “Which wicketkeeper took the most catches in PSL 2021?”

ESPNcricinfo adds to its list of innovations by launching the first phase of the “AskCricinfo” service, a natural language search tool on query for all T20 stats including tournaments like IPL, BBL, CPL, PSL, T20 Blast, BPL, T20 Internationals and Women’s T20 internationals that will democratize access to cricket stats allowing even a casual fan to get deep stats by just “asking” in English language (through text or voice). This is the first step towards the vision of offering a rich tool to cricket fans globally that can answer on query any data stats through text and voice. While starting with T20s, over time AskCricinfo service would cover all other formats of the game. Fans can experience the new service at https://www.espncricinfo.com/ask

ESPNcricinfo with its reliable global data and editorial operations built over decades, partnered with AskHereFirst, which is founded by Prof. Vishal Misra, also the co-founder of Cricinfo, to conceptualize and launch the first phase of this innovative application. The application leverages the deep statistical database of Cricinfo built over the years – Statsguru, and using capabilities of AI platform. Along with plans to add in advanced query options in future, besides search query capability in other languages, Prof. Vishal Misra will be working closely with ESPNcricinfo Editor - Sambit Bal and the team to make it a compelling offering on ESPNcricinfo.

Fans need not be weighed down by the complexity of data, as the AskCricinfo application would do all the hard work and throw up an output that is rich with insights and in a language that fans easily understand.

Who has been out stumped most often in IPL

Highest successful run chase by a team in IPL

Bowlers who have conceded most fours in CPL 2020

Batsman being dismissed LBW most number of times in the BBL

Which batter has the most 50+ scores in Women’s T20Is

Most runs from RCB in any IPL season & so on…

AskCricinfo service lets a fan win a banter, become a cricket geek, or pretend to be one, and above all - love cricket even more.

According to Sambit Bal, Editor-in-chief ESPNcricinfo “This is the first step towards what could be significant in making cricket stats accessible on demand. ESPNcricinfo’s Statsguru has been the default stats query tool for professionals and stats enthusiasts for years, but AskCricinfo is an attempt to unlock our data vault for everyone. It is very much a work in progress, and it cannot yet answer everything, but like all tools powered by artificial intelligence it will get better and better with use. Therefore, we urge cricket fans to use it in the spirit of collaboration, and of course, for fun.”

Commenting on the release, Ramesh Kumar, VP & Head of ESPN India & South Asia said, “The vision for AskCricinfo is to be the one-stop companion application for cricket fans, gamers, players, analysts and officials to query for data insights and any information on cricket. We have made a small beginning of this with the launch of the first phase of the product offering, and in the coming months, will be building additional features in this application, besides advanced querying capabilities. Fans will have unrestricted access to use this service for a limited period and we will be making strategic partnerships with other platforms to ensure as wide a reach for this.”

ESPNcricinfo will have exclusive placements for fans to access this service. Users can access the AskCricinfo application on the ESPNcricinfo website or through the ESPNcricinfo App, which is available on both iOS, and Android Play Store. Fans can click here to know how it works.

India is the global Headquarters of ESPNcricinfo with operations in UK, US, Australia, New Zealand and various subcontinent countries. With offices in Bangalore and Mumbai, the Indian operations  boasts of a world-class team of journalists, writers, developers, editors, content creators and more.

Some of the other unique stats application from ESPNcricinfo are Superstats – a new language for numbers-based story telling in cricket. It consists of three elements: Smart Stats, which puts each batting and bowling performance into context by looking at match situations and player quality; Luck Index, which for the first time quantifies the element of chance in cricket; and Forecaster, which offers a glimpse into win probabilities in each game as a fun tool for fans to use during the game. These metrics have been derived from ESPNcricinfo’s rich ball-by-ball database, and from complex algorithms developed by a team of excellent engineers working with leading data scientists.

Posted by editor-manu-sharma at 1:18 PM