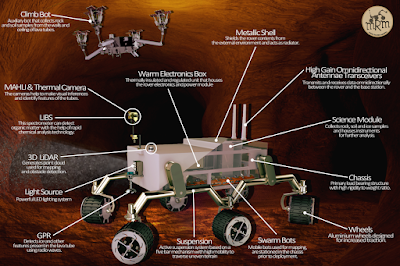 Manipal Institute of Technology (MIT) is elated to announce its big achievement in the International Rover Design Challenge (IRDC) 2021. MIT has bagged the 3rd position out of 32 teams from 4 countries in the 2nd edition of IRDC which was announced by The Mars Society South Asia (MSSA).

The second edition of The International Rover Design Challenge (IRDC) was organized by the Mars Society South Asia (MSSA) this year. MSSA is the official chapter of The Mars Society for the South Asian region. The Mars Society is the world's largest, most influential space advocacy organization dedicated to the human exploration and settlement of Mars. From MIT team Mars Rover Manipal had to submit a System Concept Review (SCR) within a set time frame and scored 530 points for the submission.

Further to the accomplishment by the MIT students, Cdr. (Dr.) Anil Rana, Director of Manipal Institute of Technology (MIT) says, “Congratulations to the entire MRM team. You have made MIT and the entire MAHE very proud of your grit and determination. Well-done and many more successes to come in the future”

Team Mars Rover Manipal had 30 - members from 2nd and 3rd year engineering students designed rover parts keeping in mind the various factors that would be different on Mars. We were expected to carefully plan each subsystem of the rover, considering various extra-terrestrial conditions and parameters in the design. A 26-page report which included CAD, simulation, PCBs, graphs, and flowcharts were submitted alongside a short video. The competition was entirely virtual, and submission was from home.

IRDC, an online competition for university students, challenges them to design Mars rovers that are fully equipped and mission-ready for actual operations on Mars. Students are encouraged to be as imaginative, creative, and insightful as possible within the practical, implementable limits of humans. The competition took place during July-September, and 32 teams from 4 countries (India, Poland, Sri Lanka & Bangladesh) participated.

Posted by editor-manu-sharma at 1:27 PM