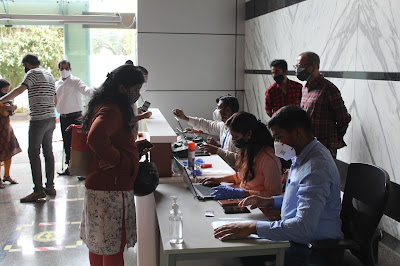 The Salarpuria Sattva Group, India’s leading Property Development, Management and Consulting organization, has always been at the frontline, helping those in need, during the pandemic. During the second wave as well, the group has gone all out  to  safeguard the health of its employees,  as well providing timely help to its customers and the general public at large.

In order to combat the second wave, the Group conducted a Corporate COVID Vaccination Camp, at its corporate office in Bengaluru, for all employees,  free of cost.

In addition, the company has also in a timely manner, facilitated oxygen concentrators, hospital admissions, doctors on call, as well as its own quarantine facility, to help employees and their family members during the second wave.

Extending its outreach beyond employees, Salarpuria Sattva also rolled out several medical and non-medical initiatives for its customers, who reside in the Group’s many properties, across Bangalore and other cities. From facilitating emergency services like ambulance on call by collaborating with an Emergency healthcare provider, to providing oxygen concentrators in case of emergencies to customers of its residential projects, on a first come first serve basis.

Commenting on these initiatives, Mr. Bijay Agarwal, MD, Salarpuria Sattva said, “The safety of our employees is our topmost priority. In response to the evolving pandemic situation, we realigned our efforts for the health and well-being of our employees. Vaccination is one such step towards helping our employees get the best support, at every stage.”

In addition, the Sattva Group’s education wing Greenwood High international School in association with Maharaja Agrasen Hospital, Bengaluru, launched a Free Oxygen on Wheels initiative with Five sophisticated buses to provide free oxygen to people waiting to get a bed outside city hospitals.  Each bus has been redesigned to accommodate 12 patients at any given time. This was inaugurated by the Hon’ble Minister for Revenue, Government of Karnataka, Mr R Ashoka.

Earlier, during the first wave, the Group had also announced a contribution of Rs 1 crore to the PM-CARES Fund and 1.35 crore for the Karnataka and Telangana CM’s Relief funds. The group had also provided meals to about 1,500 migrant workers daily, to support the fight against these unprecedented times.

With 3 decades of expertise, the Salarpuria Sattva Group has grown into one of the most trusted builders in the country today. Headquartered in Bengaluru, India, it is also a well-known name in Hyderabad, Kolkata, Pune, Coimbatore and Goa. The Group will soon be expanding its presence in Mumbai. With 56 million sq.ft spaces completed, 34 million sq.ft under construction and 32 million sq.ft in the planning stage, the Group is one of the premium builders in India today. The Group’s cutting-edge upcoming projects in Hyderabad include: Knowledge City, Knowledge Capital, Knowledge Park and Image Towers (Innovation in Animation, Multimedia, Gaming, and Entertainment), a PPP based model with the Telangana State Government. By further expanding into various verticals such as co-working, co-living, education, hotels, facilities management and warehousing, the Group today stands tall as a frontrunner, shaping India’s growth story. The Group’s unwavering adherence to quality has given it the “trusted” tag among builders in the country, renowned for its “A Stable” CRISIL rating.

Posted by editor-manu-sharma at 12:27 PM