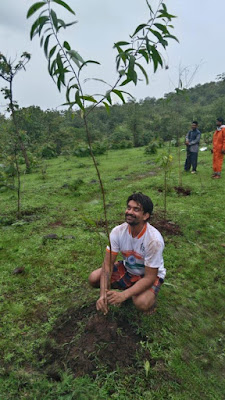 Ashish Patel, 36, is an Environmentalist at heart residing in Parnera town in Valsad district of South Gujarat. He works as a Senior Executive in the Quality Control Department at pharmaceuticals giant Sun Pharma plant in Silavasa.

Parnera has historic, spiritual and religious significance. Parnera Hill once had a fort erected in the 15th century, later captured by Sultan Muhamad Shah Begda. Later in the sixteenth century, the Portuguese of Daman conquered it and later during the Peshwa era, Chatrapati Shivaji Maharaj gloriously visited Parnera Fort on his way back from Surat. The hilltop is blessed with temples of Deity Kali Mata, Deity Ambika (Chamunda) Mata and the great Lord Shiva. It also possesses a mosque of Chand Pir Baba Dargah. Today, nearby people visit it for hiking, trekking, recreational, spiritual and religious purposes from nearby localities.

Ashish was visiting the Parnera hill-top once in 2016 along with his companions and got an idea to take the onus of tree plantation to enrich the biodiversity. From 2017 he started executing the idea and his efforts made him enlarge the group with members from nearby localities. Every Sunday he spends three hours in digging the soil, ploughing, planting sampling, watering the saplings and trees and cultivates the varying portions of the hilly area. When the locals request him to visit their place for tree plantation he happily agrees.

His five years of endurance has made 700 trees live which includes categories like Neem, Bamboo, Mango among varying others and he plans to plant 150 saplings annually. He likes to call his group Swatch Bharat. His friends join him in carrying water in cannons, digging, ploughing, bringing saplings and contributing in varying ways as Climate Warriors.

Apart from tree plantation, Ashish is involved in other social activities as well. He distributed food and groceries to the needy in 2020 lockdown and also arranged for an oxygen cylinder for a Covid-19 patient with the help of an affiliated NGO.

“I want the future generation to have a green pollution-free zone in my locality and that’s my only motive and inspiration to carry out this task. I am grateful to the people who accompany me on Sunday mornings for this selfless activity and contribute happily. Climate change is for real. 13th Goal of UN SDGs which is Climate Action is something we all need to consider and give a thought for ourselves and our future generations. Tree plantation is one of the tasks we can do. But other things like reducing plastic usage, waste-management, recycling among others can also be considered by the responsible citizens and everyone can make difference through their efforts. My thought-process is simple – plant trees, inspire others through actions and make a small difference”, states Eco-Warrior Ashish Patel.

Posted by editor-manu-sharma at 12:41 PM