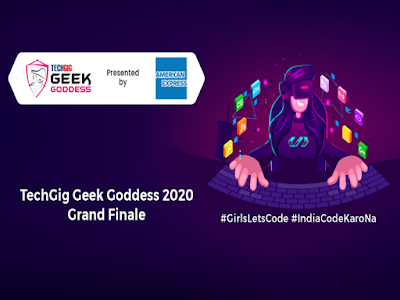 She came, she coded, and she won – not once but twice! It’s a classic tale of a small-town girl toppling the tables for all top technologists twice. Hailing from Surat, Kruti Dharaiya - who graduated from National Institute of Technology, Surat this June - clinched the champion’s trophy from 70,097 women technologists at TechGig Geek Goddess 2020 recently. Earlier this year, she won the top woman coder trophy – Code Diva - at the Guinness World Record holder event TechGig Code Gladiators 2020 in August!

Kruti - who works in Bengaluru with Amazon - is presently working from home and prepared for the contest along with her office tasks. Not just her, the rest 70,096 women technologists had pinned their hopes on the Geek Goddess code competition to see their dreams turn into reality. “I participated in Geek Goddess because I know that this platform helps participants network effortlessly with peers, and also gets you in the radar of top recruiters,” said Kruti. She loves competitive programming and is presently focussed on learning the nuances of her new job. This is the first time that she participated in Geek Goddess and Code Gladiators.

TechGig Geek Goddess is an annual coding contest for women technologists that provides a national platform for the participants to showcase their programming skills. Conceptualised in 2016, this code competition concluded its 2020 edition with a virtual career fair and grand finale on December 4 & 5, 2020.

“Geek Goddess represents the adage that ‘alone we can do so little, and together we can do so much’. This is not just a coding contest but a collective rising of the Indian women technologists. In 2016, when the first edition of Geek Goddess was announced, about 15,000 participants registered. Today, in the sixth edition this number is more than 4 times with 70,097 registrations,” informed Sanjay Goyal, Business Head, TimesJobs and TechGig about the event.

For the participants of Geek Goddess, the journey in the coding fraternity has just started. As Laisha Wadhwa, winner of AI/ML hackathon at Geek Goddess 2019 and participant in the 2020 edition said, “My victory at Geek Goddess encouraged me to participate in seven other hackathons, many of which I won”. Winning and prizes apart, meeting industry icons are an opportunity second to none. As Snehlata Mishra, coding champion of Geek Goddess 2018 and runners-up in 2019 put it, “I got an opportunity to meet many women leaders on the Geek Goddess floor. In fact, after the win, my social media accounts started getting immense followership, and suddenly from an engineer, I became an icon of sorts”.

These experiences aren’t just limited to the winners but all participants - both present and past. Many participants relive the rich experiences shared during the code competition while forming a team or devising a solution or making a presentation to a jury. All these aspects transitioned Geek Goddess transition from an event to a dedicated community of women technologists who believe in growing together and learning together.

Apart from growing in scale, the event also added many layers in its format as hosting Women Disruptors Conference annually where women leaders descend to talk about issues related to tech careers.  Like the past two years, this year’s keynote too was delivered by Ruchika Panesar, Vice President, Technology at American Express. India’s first special-abled IAS officer and engineer, Ira Singhal, Joint Director, Department of Women and Child Development and Joint Director Department of Social Welfare, Govt of Delhi  delivered the special industry address and reflected upon how women professionals were working relentlessly in the government set-up during the pandemic times.

“TechGig Geek Goddess is one of the most eagerly anticipated events for women in technology in India,” said Ruchika Panesar. “At American Express, we strive to be the best, most inclusive and diverse place to work in technology, bar none. We continually work to strengthen the diversity of our organisation, while building a culture where everyone feels included, valued and respected, and is able to bring their experiences and authentic selves to work every day. We’re proud to sponsor TechGig Geek Goddess because their focus on building opportunities for women in technology closely aligns with our own. It is wonderful to see women coders embrace their engineering muscle and demonstrate their prowess. American Express congratulates the winners and all other participants in this year’s TechGig Geek Goddess coding contest. You should be proud of your success, and the example that you set for all women in technology,” she said.

Posted by editor-manu-sharma at 12:52 PM