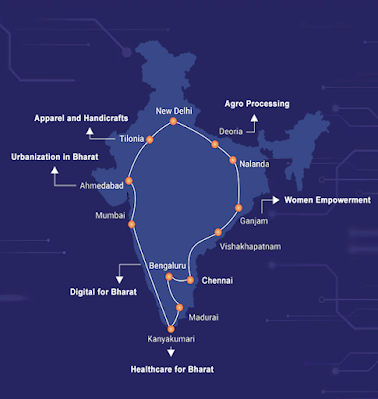 National Skill Development Corporation (NSDC) and Jagriti Sewa Sansthan have joined hands for Jagriti Digital Yatra 2020, a nation-wide digital yatra to inspire millions of youth in the country to become entrepreneurs, and be self-reliant.  Jagriti Yatra is the flagship program of Jagriti Sewa Sansthan that has taken 500 youth and women every year, over the past 12 years, on a national train journey to explore, understand and learn from ‘Middle India’ - small towns and districts.   Amid current pandemic, the partners invite youth to join via digital format.

Under this partnership, National Skill Development Corporation (NSDC) will act as a ‘Knowledge Partner’ for Jagriti Digital Yatra 2020.  It will assist in driving awareness and to motivate youth to join Jagriti Digital Yatra 2020 campaign through its skilling ecosystem which includes sector skill councils, training partners, and training centres. NSDC participants (digital yatris) will get a discount of 20% on the subscription fee, which will be applicable only for first 100 registrations.

In line with Hon’ble Prime Minister’s vision for an Aatmanirbhar Bharat, NSDC and Jagriti aim to promote ‘Udyamita’ or ‘Enterprise’ on a large scale. The Jagriti Digital Yatra will carry over 1,000 Digital Yatris on a journey of national exploration through digital means for 15 days from 24th December 2020 to 8th January 2021 (visit https://www.jagritiyatra.com/ for more details).

Sharat Bansal, Chairman of Jagriti, Co-Founder of JECP said “The Jagriti Digital Yatra 2020 represents the spirit of Jagriti and that of the country. When there is a crisis, we will rise undaunted, creating a larger journey and a wider message of enterprise across the country. Jagriti is a charitable organization with the mission of Building India through Enterprise with a particular focus on small towns and districts – Middle India.”

At the core of JDY 2020 is the belief that entrepreneurial energy must be mobilized for revival and growth.  With due encouragement and support, leaders in the middle can create local enterprise and local employment helping revive the country as a national movement. The Jagriti Digital Yatra will reach out to millions of Indians during these 15 days virtual journey.

Jagriti Digital Yatra 2020 seeks to multiply the number of participants, outreach, and its impact. It will engage 3,000 Digital Yatris using digital platforms for group work and experience, bringing enterprise learning through role model visits and digital maps. Yatris will interact through live sessions with 12 role models at key locations where the yatra stops and will undertake business plan competitions. The yatra will have national speakers like Dr Kiran Bedi, Dr. RA Mashelkar, R. Gopalakrishnan among others. The yatra will host panel discussions on 6 key issues relevant for smaller towns and districts – Health, Women empowerments, Digital, Urbanization, Agriculture, Apparel and Handicrafts, subjects that are the focus of the Jagriti Enterprise Center – Purvanchal (JECP). The yatra will have 90+ hours of content and engagement with 200+ speakers over 15 days. Peer to peer interaction with participants forms the core of the digital learning process, with online learning-by-doing.

National Skill Development Corporation, working under the aegis of Ministry of Skill Development & Entrepreneurship, is a unique public-private-partnership which aims to catalyze creation of quality vocational training ecosystem in India. Since inception in 2010, NSDC has trained more than 2.5 crore people through its partnership with 600+ training partners, 11,000+ training centers spread over 600+ districts across the country. NSDC has established 37 Sector Skill Councils and is implementing Government’s flagship skill development schemes such as Pradhan Mantri Kaushal Vikas Yojana (PMKVY), Pradhan Mantri Kaushal Kendra (PMKK), National Apprenticeship Promotion Scheme (NAPS), among others.

Launched on 2nd October, Gandhi Jayanti, Jagriti is paying homage to the father of the nation and the Yatri in every Indian. Gandhiji travelled on a train on his return from South Africa, while the Dandi March in 1930 helped shape our freedom struggle. The Yatra will also pay homage to Swami Vivekanand, with a first stop in Kanyakumari, where Vivekanand meditated after 4 years of travels across the country. Jagriti believes journeys like these have defined India from time immemorial, acting as important crossing points. The Jagriti Digital Yatra 2020 seeks to create a new crossing point at the end of 2020, when the country starts a 2-year journey running up to the 75th anniversary of India’s independence in 2022.

Posted by editor-manu-sharma at 1:36 PM