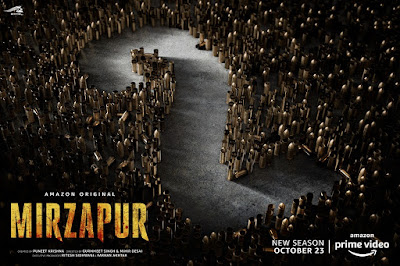 * Mirzapur season 2 will be available to stream on Amazon Prime Video in 200 countries and territories, in multiple Indian languages, including Hindu, Telugu and Tamil

Amazon Prime Video has announced that the second season of its much anticipated Amazon Original Series Mirzapur, will launch on 23rd October, 2020. Set in Mirzapur, the hinterland of North India, season 1 of the crime drama had taken the audiences into a dark, complex world of guns, drugs and lawlessness. It’s relentless pace, well etched-out characters and nuanced narrative had left the fans wanting more.  With Season 2, the canvas of Mirzapur gets bigger but the rules remain the same! With a stellar ensemble cast featuring Pankaj Tripathi, Ali Fazal , Divyenndu, Shweta Tripathi Sharma , Rasika Dugal , Harshita Shekhar Gaur , Amit Sial, Anjum Sharma, Sheeba Chaddha,  Manu Rishi Chadha and Rajesh Tailang returning to the action-packed series,  get ready for a  journey into the stylish yet rustic world, where crime, drugs and violence rule and one needs to fight to survive. The sequel of the show will also feature Vijay Varma, Priyanshu Painyuli, and Isha Talwar. The much awaited Amazon Original Series is created and produced by Excel Media and Entertainment and will launch exclusively on Amazon Prime Video in over 200 countries and territories worldwide.

Speaking on this momentous announcement, Aparna Purohit, Head of India Originals, Amazon Prime Video, commented, “Mirzapur has truly been a game-changer title for us. The show heralded a new idiom of storytelling for Indian audiences - its characters have become a part of the popular culture. We are certain that the riveting narrative of season 2 will leave our audiences mesmerized once again. ”

“Excel Entertainment has received immense love for constantly pushing the envelope when it comes to creating impactful and powerful content,” said Ritesh Sidhwani, Producer, Excel Entertainment. “Mirzapur was a step in that endeavor. It was not just about breaking boundaries for the audiences, but also for ourselves as content creators. Bringing thrilling and untold stories from India’s hinterland without losing authenticity has been our biggest win. All the praise that season one of Mirzapur has received, not just in India, but across the globe, is heartening. It pushes Excel Entertainment and Amazon Prime Video to continue the momentum with the second season of the show.”

“The love and appreciation that the show has garnered since its launch has been simply overwhelming. Taking it a notch higher, we’re certain that the audiences are in for a visual treat in the sequel” said Creator Puneet Krishna. “Seeing their excitement for the season 2 for months now made each one of us deliver a performance that matches up to the scale at which the show has now placed itself. We are thrilled to take the fans to another dynamic world of Mirzapur that they have been waiting for a very long time.”

The series is produced by Excel Media and Entertainment, created by Puneet Krishna and directed by Gurmmeet Singh and Mihir Desai.

Mirzapur season 2 will join the thousands of TV shows and movies from Hollywood and Bollywood in the Prime Video catalog. These include Indian films Gulabo Sitabo, Shakuntala Devi, Ponmagal Vandhal, LAW, French Biriyani, Sufiyum Sujatayum and Penguin along with Indian-produced Amazon Original series like Bandish Bandits, Breathe: Into The Shadows, Paatal Lok, Four More Shots Please, The Family Man, Inside Edge, and Made In Heaven and the award-winning and critically acclaimed global Amazon Original series like Tom Clancy's Jack Ryan, The Boys, Hunters, Fleabag, and The Marvelous Mrs. Maisel. All this is available at no extra cost for Amazon Prime members. The service includes titles in Hindi, Marathi, Gujarati, Tamil, Telugu, Kannada, Malayalam, Punjabi, and Bengali.

Prime members will be able to watch all episodes of Mirzapur Season 2  anywhere and anytime on the Prime Video app for smart TVs, mobile devices, Fire TV, Fire TV stick, Fire tablets, Apple TV, Airtel, Vodafone, etc. In the Prime Video app, Prime members can download episodes on their mobile devices and tablets and watch anywhere offline at no additional cost. Prime Video is available in India  at no extra cost to a Prime membership for just ₹999 annually or ₹129 monthly, new customers can find out more at  www.amazon.in/prime and subscribe to a free 30-day trial.

Posted by editor-manu-sharma at 1:44 PM