How Tinder Members are Making Connections During Lockdown with Tinder Passport? 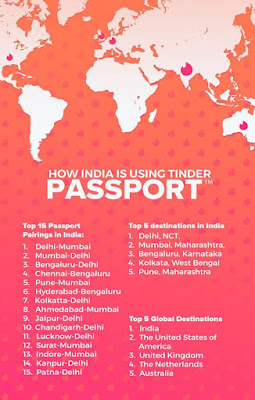 Tinder opened up its paid feature Passport for all members; the majority of members are using the feature to Passport between Indian cities

(Note on background: Tinder Passport is typically a paid feature for Tinder Plus & Gold subscribers. Members can search by city or drop a pin on the map and you can begin Liking, matching, and chatting with Tinder members in a destination of their choice. They can navigate between their current location and new destinations. This was made free for all Tinder members.)

With social distancing becoming the norm, meeting people is a no go. That’s why Tinder made its Passport™ feature free through April — Tinder wants to facilitate making new connections and maintaining social interactions during this challenging time. By allowing members to temporarily change their location, Tinder Passport lets them connect with matches all over the world, no matter how far away they are. Because — louder for the people in the back — social distancing doesn’t mean you can’t still connect with people virtually. And based on recent data, Tinder members are most definitely doing just that.

By looking at data from March to April, we learned which cities and countries members are virtually traveling to, and which cities are frequently interacting with each other. The majority of Tinder members are using the feature to change location within the country, with Delhi-Mumbai and Mumbai-Delhi as the top 2 cities Passporting to each other. Tinder’s resident psychologist Sonali Gupta thinks it is very telling that majority location change is between members within India,  “One of the reasons could be that while there is a global pandemic world over, what's different is how countries are dealing with it. When people are reaching out to other people in Indian cities, they could possibly feel that their context and personal reality would be better understood by other Indians. This could be a reflection of realistic expectations - as people see that international travel is unlikely and they stand a greater chance of meeting someone who is based within the country.”

Excuse us while we virtually check out how Mumbai is doing during the lockdown.

Please find below a full factsheet on top cities and countries Indian Tinder Members are Passporting to.