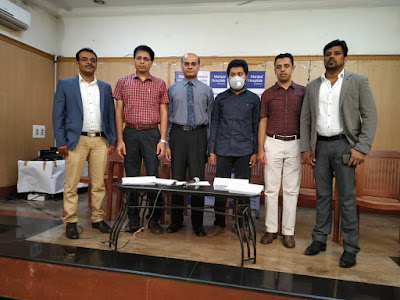 Arshad was born with a serious and rare heart condition known as Transposition of Great Arteries (TGA), which occurs in 3 percent of all congenital heart defects, and about two-thirds of the cases are identified in boys. In TGA, two main arteries carrying blood from the heart to the lungs and body are not connected as they should be and are in reversed position. Ideally, such children needs corrective surgery within first 6 weeks of life. However, in his case it remained undetected till he attained the age of 3 years. Hence, he was put through a palliative Operative at Chennai. Due to his bad luck, he developed viral Infection of the heart making his left ventricle (main pumping chamber) weak that made many surgeons refuse to perform further palliative surgeries.

Speaking about the case, Dr. Devananda N S, HOD & Consultant, Cardiothoracic Vascular Surgeon and Heart Transplant at Manipal Hospitals Bangalore said, “Arshad has been consulting with us from 2011 when he was just 14 years old. He had severe infection coupled with complications due to which the left side of his heart was weak. After crucial examination, we decided to perform modification of Sennings Operation. As the right ventricle was performing better, we decided to increase the load on right Ventricle. After the surgery, his right ventricle started pumping blood to aorta with which the condition of the patient improved but we were not sure for how long we could sustain” Dr. Devananda added.

The operation reaped benefit and the boy was robust in health and progressed in academics too. He was in pink of his health and enjoyed cycling as well. After completing his schooling and PUC, he embarked on his Engineering studies. However, during his follow up visit to the Hospital, Dr. Devananda observed that the boy’s heart was deteriorating. Further investigations and medical reports confirmed his doubts. It was decided that a heart transplant was the only viable option.

Speaking after the success of Heart transplant, Dr. Devananda N S, HOD & Consultant, Cardiothoracic Vascular Surgeon and Heart Transplant at Manipal Hospitals Bangalore said, “The task of operating on a boy who has already undergone two surgeries earlier was quite challenging. This was an emotional journey for the team as we have been associated with the case for 8 long years. However, multidisciplinary approach, proper planning for the transplant and a focused and dedicated team effort paved the way for a successful heart transplant. Infact we had to undo various procedures that was done previously and to many modifications to fit the normal heart. Sincere efforts put in by our doctors, reliable and expert nursing staff, anesthetists gave new lease of life to the boy and he was discharged on 10th day post the surgery and was administered Immuno suppression medicine and has recovered well.”

Sharing his thoughts, the patient said, “I have no words to thank Dr. Devananda and the entire team of Manipal Hospitals who have been a rock solid support to me and my family. Ever since I was 14-year-old, they have been taking care of me. I am feeling quite healthy and have resumed normal routine. My heart felt gratitude to Manipal Hospitals and most importantly to the donor’s family who have given me a new lease of life. I would like to take this opportunity and highlight the need and importance of Organ Donation and urge people to come forward without hesitation and pledge for this nobel cause.”
Posted by editor-manu-sharma at 6:32 PM