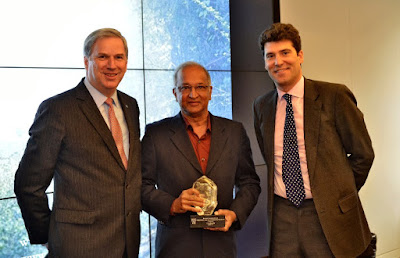 The award is named after WCS’s Dr. George Schaller, considered to be one of the greatest wildlife scientists and onservationists globally. The WCS George Schaller Lifetime Award in Wildlife Conservation Science has been created to honour WCS colleagues for outstanding contributions to saving wildlife and wild places. Dr. K. Ullas Karanth is the first recipient.

Dr. George Schaller said “It has been my honour and pleasure to know Ullas since 1988 and mentoring his early career with the Wildlife Conservation Society. No one, anywhere, has done better research and conservation on large carnivores than Ullas."

Dr. Karanth was honoured by the WCS Board of Trustees on 29th October in New York. He was presented with the award by WCS President and CEO Cristián Samper and WCS Board Chair Alejandro Santo Domingo.

“Dr. Karanth has set the bar for excellence in science and field research,” said Dr. Samper. “His leadership on tiger conservation is recognised across the globe, but his influence extends even beyond tigers. Today, there is not a species of big cat that is not better studied and conserved because of Ullas’s rigorous and conservation-focused science. It has been a great honour to work with Dr. Karanth.”

Dr. Karanth joined WCS in 1988. He was inspired to become a wildlife biologist by the work of Dr. Schaller. Dr. Karanth’s research is often described as pioneering and groundbreaking. He has focussed on the ecology of tigers, sympatric predators and other large mammals, predator-prey population ecology, and mitigation of human-wildlife conflicts. He has provided research expertise to projects across the world including in Thailand, Malaysia, Cambodia, Lao
PDR, Myanmar, Indonesia, Russia, as well as in Africa and Latin America. He has published hundreds of scientific papers, authored many books and written popular articles in various journals of international repute.

A recipient of several other honours including the Sanctuary Asia Lifetime Achievement Award (2007), the J. Paul Getty Award for Conservation Leadership (2007), the Karnataka Rajyotsava Award (2010), and the Padma Shri (2012), Dr. Karanth is currently the Director of Centre for Wildlife Studies.
Posted by editor-manu-sharma at 4:06 PM