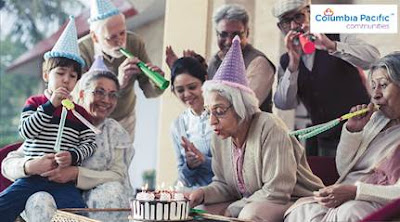 Columbia Pacific Communities, India's largest senior living community operators, unveils its first TV ad campaign at Ted Talks India Nayi Baat - II hosted by Shah Rukh Khan. The seven episode show will be aired on weekends at 9:30 p.m. starting November 2. Columbia Pacific Communities has designed the campaign to target the audience of the show, who are progressive and positive in their thoughts and actions. Taking inspiration from the theme, the TVC has been designed and conceptualised in a manner that resonates with the concept of Nayi Baat.

The Ted Talks India Nayi Baat – second season is poised to reach out to the new age India by focusing on social issues and their solutions. In a span of 40 seconds, the TVC, in association with Ted Talks Season 02 Nayi Baat, showcases the brand ethos of positive ageing. The film celebrates the idea of a healthier, happier, worry-free and more purposeful future for seniors who choose to live to their fullest and on their own terms. It thereby, encourages senior citizens to opt staying at The Virtuoso Club and Serviced Residences, Bangalore, India’s first senior living community designed to international standards.

Highlighting the concept of the TVC, Piali Dasgupta, Vice President, Marketing, Columbia Pacific Communities, says, "Produced entirely in-house on a shoe string budget, the communication, with the help of captivating images, tells the story of a happier, brighter, healthier and blissful future for our seniors. It weaves in the brand purpose of positive ageing and clearly positions the offering as “serviced residences for seniors” differentiating it from old age homes. The creative challenge was to tell our story in 40 seconds in a way that it showcased our product and service offerings optimally. The communication needed to be engaging, appealing and leave the viewer with a sense of hope and optimism while delivering all of the above. The communication addresses the brand's primary TG (55+ seniors), who have sought and not found this solution."

The TVC offers a true sense of enthusiasm and zeal which stands against the stereotypes one attaches with old age. The video film has been carefully crafted to offer a glimpse of what your future could be like if you choose to stay at the Virtuoso Club and Serviced Residences.

Commenting on choosing Ted Talks as the platform to release the TVC, Basav Mukherjee, Chief Revenue Officer, Columbia Pacific Communities, says, "We are proud to partner Ted Talks as we believe that change of any kind is triggered by conversations. At Columbia Pacific Communities, it is our constant endeavor to shift paradigms as far as senior citizens is concerned. And this will be possible only through conversations.  Star World has been one of the most popular entertainment channels in India, reaching out to 1.3 million English speaking audience for over two decades in our country.  It was our channel of choice given its deep resonance with our audience."

Link to TVC: Presenting The Virtuoso Club and Serviced Residences by Columbia Pacific Communities
Posted by editor-manu-sharma at 6:05 PM