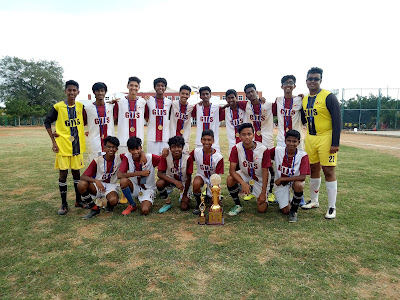 Students of Global Indian International School, Whitefield (Bengaluru) emerged as winners at the recently concluded 3-day CBSE Cluster 8 (Karnataka U-19 Boys) Football Championship hosted at Delhi Public School, Mysore. A pulsating semi-final against Sindhi School, where GIIS were one goal down, was eventually converted into a comeback victory with 2 winning goals. The tournament final win with 2-0 against Brigade PSBB School showcased the results of their rigorous practice and on-ground team work.

Commenting on the achievement, Mr. Rajiv Bansal, Director Operations, GIIS India said, “Our emphasis has always been on creating well-rounded individuals and future leaders. We encourage students to pay equal attention to sports and other extra-curricular activities through our NINE Gems framework for holistic development of students. Platforms like the CBSE cluster tournaments are extremely important for shaping and honing sports spirit in students and providing them relevant opportunities to excel in the field of their choice. We are happy that our student’s hard work and the school’s commitment has paid off and we have won the Championship trophy.”

Filled with excitement, Dr. Shivananda C S, Principal GIIS Whitefield added, “I am extremely happy to see my student’s hard work and dedication getting recognised through this win. Our players never looked tired though they played series of matches in a row and yet raised to the top like a phoenix bird in its debut, which is commendable. A team of 16 players were enrolled in our unique Gold Squad Programme after passing a tough fitness and skill test. Rigorous training regime after school hours along with a curated diet plan helped these players become dedicated, disciplined and focused.”

The CBSE Cluster Championships are a way to identify talents at the State Level and mould them to be a part of the National Team.

Harshit Khandelwal Captain, Team GIIS Whitefield, Bengaluru said, “It is easy to win playing in the home ground without pressure. However, for us everything worked against us. We had to come out of our own self-imposed beliefs to play against our opponents. Our opponents had national players and we had to tackle them in every move. Finally, my teammates did it. I am proud of my school team.”

Neelakantan was announced best player of the tournament for his meticulous strategy and game plan during the tournament. A passionate and skilful footballer, Neel found a great platform to showcase his football skills.

During the first half of the final, GIIS’ opposition was heavy raiding but the goalkeeper Mandar Mude managed to save three critical goals. In the second half, GIIS player Vihat Bandlamudi scored the first goal followed by the second one from Neelakantan that took GIIS to a leading position with score 2-0. The tournament win was symbolic of the planned practice that had been implemented by the coach and the superb execution of skills and teamwork.
Posted by editor-manu-sharma at 6:52 PM