Make Way for Ambulance: a New Campaign Initiated by HWARF in Association with ONGC 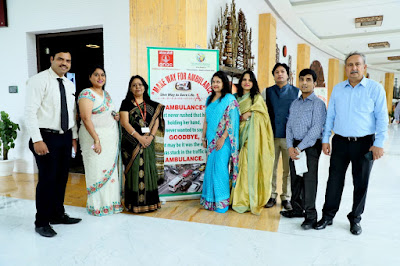 The Campaign was held at 6 location in south Delhi Vasant Vihar, Vasant Kunj, Moti Baug, Munirka, Kisangarh and Fortis to spread awareness  in an attempt to draw attention on  saving critical patient lives in emergency vehicles. This campaign made positive impact on every citizen endorsed their pledge and  acknowledged that whenever they hear the siren of ambulance or see the ambulance stuck in traffic they will make their best effort in making way for Ambulance in giving life to patient on emergency vehicle.

The statistics say that many times ambulance does not reach to hospital on time because of excessive traffic in roadways and highways which cost loss of someone's valuable  life.People of south Delhi have shown their support in  view of  emergency vehicles Ambulance carries precious life which can be saved if they reach to hospital on time and as a responsible citizen they will move one step ahead in making way for Ambulance in reaching them to the nearest hospital.

Ms. Christine Swaminathan Founder Trustee  from   ‘Humanitarian Welfare and Research Foundation NGO (Mumbai)
have always initiated on social & welfare campaign in benefiting the society and have made huge impact on  “Make Way For Ambulance”  campaign in spreading  awareness amongst people to be more responsible and attentive in giving way  to ambulance in this way one can contribute their charity towards humanity.

Mr. Rakesh Kumar Trustee from HWARF adds that “It  was necessary to create a Campaign like Make “Way for Ambulance” so people get more cautious when they hear the siren of Ambulance and help the Ambulance to reach their destiny at time so person’s life can be saved at time”.

Alka Mittal – Director (HR) – ONGC said “Now a day due to increasing Traffic, Ambulance gets stuck in the traffic with critical patient  fighting between life and Death make impossible to reach their destined hospital without the social need of campaign. This campaign will make impact on people of Delhi for Making Way for Ambulance will create an awareness amongst the every responsible citizen in saving live of our dear ones in Ambulances.
Posted by editor-manu-sharma at 12:06 PM