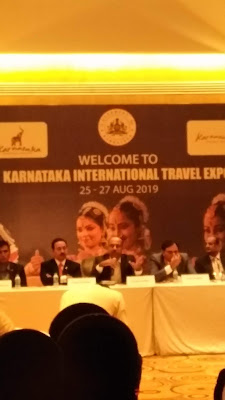 Department of Tourism, Government of Karnataka, and Karnataka Tourism Society jointly hosted the inaugural edition of ‘Karnataka International Travel Expo’. The event was held from 25 – 27 August 2019 and had participation from over 400 registered buyers and media personnel from 30 countries.

The KITE event was inaugurated by Honourable Chief Minister of Karnataka, Sri B.S. Yediyurappa on 26th August 2019 at The LaLiT Ashok Bengaluru. Inaugurating the event, Sri.B.S. Yediyurappa said “Karnataka has immense potential to become a world-class, destination, and we in Karnataka are supporting the efforts of the tourism department to market the State globally. The vision for Karnataka Tourism is to increase the sector’s GSDP Contribution to 20% by 2025 and provide direct and indirect employment to 65 lakh people through tourism”.

The chief goal of the KITE expo was to showcase Karnataka Tourism to the world and increase the overall size of the State’s tourism sector. The event has facilitated approximately 10,000 B2B Meetings to bring together International and Indian buyers and sellers, showcasing the best of Karnataka and creating an opportunity for visitors to get first-hand exposure to the various tourism products of Karnataka. The B2B Meetings have the potential to offer immense business opportunities for the tourism industry in Karnataka. Many tourism industry players of Karnataka who participated in the event have expressed their satisfaction with the overwhelming response.

* One of India’s biggest Hosted Buyer Travel Event
* The first time such an event has been held in Karnataka, making it the sixth state of India
to successfully host such an event
* More than 10,000 B2B meetings between tourism stakeholders for Karnataka over 2 days
* Participation of over 300 Buyers from 30 countries
* Over 100 Exhibitors representing various destinations and marquee products of Karnataka
Coverage from over 40 media representatives and bloggers, including 17 representatives from international markets
* Over 15 different tourism segments of Karnataka including Heritage, Wildlife, Adventure, Coastal, Spiritual, Ecotourism, Wellness, and Meetings & Conferences were showcased
* Familiarisation Tours showcasing major destinations of Karnataka will be conducted before and after the KITE event. * Prominent destinations covered include Hampi, Coorg, Kabini, Mysore, Chikmagalur, Vijayapura, Badami and Pattadakal among several others
* Karnataka Tourism Society comprising stakeholders from various industry associations provided complimentary hotel stay of over 700 room nights to support the pre-event and post-event Familiarisation Tours to showcase the state.
Posted by editor-manu-sharma at 8:43 AM