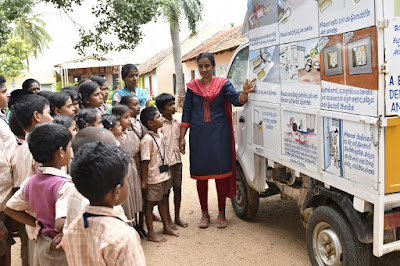 Toyota Kirloskar Motor’s [TKM] CSR case study titled “Toyota Kirloskar Motors: Evaluating A CSR Project” and authored by Prof. Utkarsh Majumdar and Namrata Rana on the unique CSR initiative, Project ABCD (A Behavioral Change through Demonstration), has been accepted for publication by the prestigious Ivey Publishing and is made available on Harvard Business Review and Harvard Business School Publishing case collections. Project ABCD, in support of Government of India’s “Swachh Bharat Mission”, was rolled out in the year 2015 being implemented in 527 schools covering 44,773 children at Ramanagara district (Karnataka) to improve public health and sanitation in villages.

India is the second most populous country in the world, with more than 1 billion citizens, and as per records, roughly half of its population, a staggering 522 million, practice open defecation. The World Bank estimates that 21 percent of communicable diseases in India are linked to unsafe water and the lack of hygiene practices, with more than 500 children under the age of five dying each day from diarrhea.

Lack of Sanitation facilities causes serious health hazards in the local communities especially affecting safety of women and adolescent children. To achieve sustainable sanitation practices in the local communities, TKM incorporated a two-pronged approach: firstly, working on building the sanitation facilities in schools and household, and then sustaining the impact with the introduction of ‘A Behavioural Change through Demonstration’ program.

Toyota ABCD program has been significantly contributing to the Government’s Sustainable Development Goal of ending open defecation in India. In the local villages of Karnataka, children hesitated to attend or would drop out from schools because of lack of toilets and

hygiene issues. Sanitation was a serious issue for girl children who had to face safety and health risks due to open defecation. TKM partnered with an NGO called SNEHA, to carry out the activities and spread the awareness at the grass-root level.  Students, teachers and villagers were educated about the unhygienic impact of open defecation, the necessity of washing hands, maintaining cleanliness of toilets and precautionary measures against infections.

TKM believes that the children would act as catalyst and using ABCD they could create a bigger impact in the community. As a result of the ABCD program, and motivated by TKM’s participation and children’s determination, individual families have started championing community sanitation. With government scheme linkages for toilet construction, residents have built their own sanitation units, with no monetary support from TKM.

Owing to TKM’s girl child sanitation initiatives and ABCD project implementation, school missing hours have also drastically reduced to zero (Earlier, an adult girl child used to go to their home for toilet usage and miss the school for over one-two hours). By the year 2018-19, TKM has further set a target to cover 100% sanitation in 1000 schools in Ramanagara to make Open Defecation Free across the state of Karnataka. Until now, more than 2,70,000 village population have been trained on sanitation through this uniquely-designed CSR program while motivating the community to initiate and construct household toilets.

Additionally, Project ABCD was taken as the case study by two IIM professors and have been published by Ivey Publishing, a leader in providing business case studies with a global perspective.

Speaking on this recognition, Mr. Masakazu Yoshimura, Managing Director, Toyota Kirloskar Motor said, “We are happy that our unique CSR initiative, Project ABCD, that began in the villages of Karnataka has been globally recognized now. It gives us great motivation that our dedicated efforts towards improving sanitation facilities and changing the mindset of local community has earned us the acknowledgement in a case available on Harvard Business Review case collection. TKM had adopted Toyota Business Practices Methodology to manage this project. Problem’s point of occurrence was identified, root cause analysis done, targets were set by further breaking it down into activities and then outcomes were measured periodically to maximize the impact and achieve the objective of 100% sanitation in target villages, by this year.

We have been witnessing a rising awareness about the sanitation levels in the villages and it’s heartening to see the project’s impact on the behavioral changes among the school children and their families. Consistent awareness created by Project ABCD amongst children on better sanitation has helped to achieve 407 school children using toilets at home. As a result of the behavioral change training, 12,517 toilets have been built across villages in Ramanagara District.  This is a further testament of our belief that instilling behavioral change is the key to sustain Health and Hygiene practices.”

One of the beneficiary, Indiramma, Mother of Monisha – a class VIII student at Government High school, Billagumba, Ramnagara said, “We never had sanitation facility at home, so we never knew the advantages of having one. But, my daughter was very determined to get a sanitation facility constructed at our home. I could experience the real difference only when I started using it. I was not educated, I couldn’t teach my daughter anything. Now that my daughter is educated, she is not only following the right practices, but educating me as well. And, all the credit goes to TKM’s Project ABCD initiative.”

Till date, TKM has constructed more than 795 units of sanitation facilities in 237 government schools across India, including: 124 units in Varanasi (UP), 497 units in Ramnagara district, 80 unit in Bangalore (Karnataka) and 94 units in Vaishali (Bihar).
Posted by editor-manu-sharma at 4:34 PM