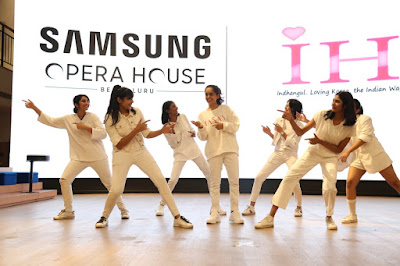 Bangalore’s favourite technology, cultural and entertainment hub, Samsung Opera House, hosted a special event for K-Pop fans in the city, organised by Bengaluru’s most popular Korean fan group Indhangul.    Korean pop culture is the most prominent aspect of the Korean cultural wave that has taken the world by storm. This extremely youthful musical form — along with K-dramas — has driven the love for South Korean content among millennials around the globe. In Bengaluru alone, there are about 8-10 K-pop fan groups with close to 3000 fans.

The Korean pop culture has received an overwhelming response in India and is a major hit amongst Indian millennials. Keeping the growing popularity of ‘K-pop’ in mind, this day-long event brought K-pop fans from across Bengaluru under one roof. The excitement among K- pop fans was evident among the crowd as this event gave them a platform to explore latest K-pop music powered by Samsung My Galaxy app. It's fascinating to see how Korean music has achieved such an incredible fan following in India.

Participants engaged in wide range of engagement-led activities themed around K-Culture which include screening of Korean content, K drama Quiz, singing and dance performances. Amongst the many activities planned for the attendees, ‘Guess the K-pop song with the help of emojis’ got the audience going with participants showing off their knowledge on K-pop culture.

Samsung has been at the forefront of understanding the millennial mindset and has been investing in building technologies that complement the evolving needs of consumers. Taking note of the huge popularity of K-content amongst its consumers, Samsung recently introduced a wide range of Korean content on its My Galaxy App - International blockbuster K-drama titles like Jugglers, Queen for Seven Days and Manhole are exclusively available on the app along with access to over 750 K-Pop songs of top artists and bands such as BTS, Exo, BTOB, and MONSTA-X.

Since its inception, Samsung Opera House has been evolving into a hub in the heart of the city. Over 60 events have been organised at the premises of Samsung Opera House in the past 10 months. Samsung is in a constant endeavour to delight the consumers and has organised a diverse range of events like workshops, tech talk shows, portrait photographer’s meet up, UK High Commission Talk Show, band performances, traditional form of art like malkhamb & Kalaripayattu performances, Screening movies and much more. Each event held at Samsung Opera House has been different and unique in its nature to keep the Bangaloreans exited and entertained. In keeping with the pulse of millennials, Samsung will host more K-Culture events at Samsung Opera House.
Posted by editor-manu-sharma at 11:32 AM