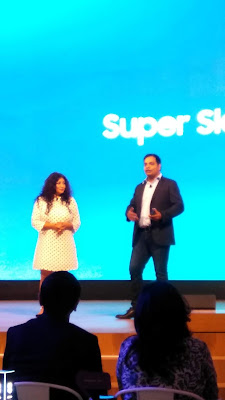 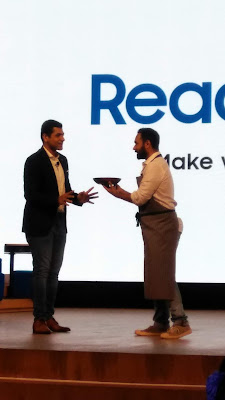 As a part of its flagship campaign, ‘India, Ready Action’ to engage with Indian millennials, Samsung in association with Instagram, on Thursday, organized a consumer workshop to share tips on creating short impactful videos using smartphones. The event had sessions by representatives from Samsung and Instagram along with a special session by Celebrity Chef Saransh Goila who encouraged the audience to participate in the campaign and spoke about the power of video as a tool to break stereotypes.

Samsung’s recently launched ‘India, Ready Action’ campaign urges Gen Z and Indian millennials to come forward and break stereotypes about India by uploading videos up to 60-seconds showcasing their vision of ‘Real India’. The campaign has already received an overwhelming response with close to 57 million views on YouTube and is providing the youth of the country an unparalleled platform to change perceptions about India.

“At Samsung, we want to enable young Indians to ride the new trend of video creation and break stereotypes about our beautiful country. Our Gen Z and young millennials are a most vivacious, socially conscious lot, driven by a zest for India. Moreover, they are digital natives who live in the ‘Era of Live’ and video is fast becoming their medium of expression. #IndiaReadyAction is tailor made for them to express themselves,” Ranjivjit Singh, Chief Marketing Officer, Samsung India, said.

“Our recently launched Galaxy A series smartphones and Samsung Smart TVs enable people to move from an Era of Selfie to an Era of Live, where people foster more authentic and meaningful connections,” he added.

‘Indians only play cricket’, ‘Entertainment in India is limited to Bollywood’, ‘India is all about spicy food’, ‘India lacks nightlife’ are some of the stereotypes millennials are attempting to break and showcase the emerging India story to the world. So far, the entries show football gaining traction in the country, fans enjoying music concerts, beautiful streets of India and the varied cuisines from different parts of the country.

The campaign, which has been initiated through the launch of a campaign video https://www.youtube.com/watch?v=4ha4hnu8TLU, has been conceptualized by Samsung’s creative agency Cheil India.

While there has been an exponential growth in video consumption over the years, led by Gen Z and young millennials, this generation of Indians is also leading content creation. Priding themselves on spontaneity and creativity, these digital natives don’t just shoot stills, but create videos. They’re adding filters and experimenting with AR effects and are sharing their life stories through videos across multiple social platforms.

With #IndiaReadyAction, this generation is getting empowered to showcase Real India through their unique videos.

Participants can share their view of Real India through short videos on themes such as food, places, entertainment and culture. Participants can shoot videos using any smartphone and post on their Instagram accounts tagging @SamsungIndia, using the hashtags #IndiaReadyAction, #City and #Theme.

The videos that participants post on Instagram will be populated on a map of India that is hosted on a Samsung India microsite (www.samsung.com/in/IndiaReadyAction). This will create a map of Real India, through the eyes of Gen Z and young millennials.

Every week, Samsung will announce 7 lucky participants who will get the latest Galaxy A70 smartphone that comes with a host of disruptive features, including a 32MP triple rear camera capable of shooting stunning super slow-mo videos, a massive 4500mAh battery with 25W super-fast charging capability and a 6.7 inch sAMOLED Infinity U display to give young consumers the freedom and convenience to share, stream and play all day long.

There’s more. At the end of the campaign, 20 of the most interesting videos will be rewarded with Galaxy A80 smartphones and Samsung 43 inch Smart TVs.

Galaxy A80 is designed for digital natives who want to interact, play and share in the moment and comes with Samsung’s revolutionary 48MP rotating camera enabling consumers to shoot same quality videos from both sides. Galaxy A80 comes with innovative features such as 3D Depth camera capable of shooting Live Focus videos & Ultra-wide camera with super steady mode.

Samsung has also launched its latest Smart TVs with industry first benefits such as Home Cloud that allow users to store their favourite moments on their smartphones wirelessly to the USB drive connected to the TV and Live Cast that empowers consumers to seamlessly stream live moments from any remote location on to their Smart TV.
Posted by editor-manu-sharma at 6:03 PM