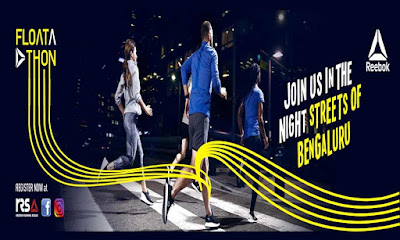 A global pioneer in the running and fitness innovation space, Reebok organised its first ever night marathon - Float-A-Thon, the most exhilarating night run of the season in Bengaluru. In line with Reebok’s efforts to encourage consumers to make fitness a way of life, this innovative 5km and 10km night run was led by Reebok Running Squad and runners of the city to experience and explore a different side of Bengaluru.

Upping up the excitement quotient of the night, Float-A-Thon was graced by actors Kriti Kharbanda and Karan Tacker, who supported the attendees while participating and challenging their own limits. The event commenced with an energetic and fun Zumba warm up for the participants, followed by an adrenalin charged flag off of the night marathon.

Speaking of the night marathon, actor, Kriti Kharbanda, said, “Reebok’s Float-A-Thon was such an actioner. It was motivating to witness such great participation from Bengaluru and people eager to make fitness a lifestyle choice. I am glad to have been associated with such an exciting event.”

Sharing his experience, actor, Karan Tacker, said, “Running has been an essential part of my fitness regime. Reebok’s Float-A-Thon gave me an opportunity to share my passion with Bengaluru and it was nothing less than a spectacle.”

This unique initiative curated by Reebok brought together the fitness enthusiasts of the city to celebrate running as a choice that they have taken up along with Reebok’s Floatride- its most technologically advanced running shoe.

Driving a wave of fitness in the city, the night was an expression of fun, passion, empowerment and solidarity. Through this night run, Reebok offered an opportunity to boost and motivate the runners that brought out their boundless potential!
Posted by editor-manu-sharma at 10:39 AM