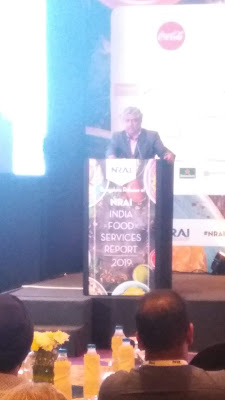 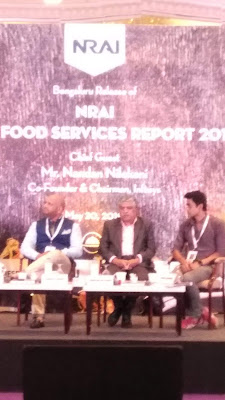 Looking at the job scenario, the food services industry is a big driver in the country and will add another 2 million jobs over the next 2 years, said Infosys co-founder Nandan Nilekani after releasing the fourth edition of the 'India Food Services' report 2019, compiled by the National Restaurant Association of India (NRAI) in Bengaluru. He said presently this industry employees over 7 million to and this is expected to grow to 9 Million.

Indicating formalisation of the food services industry was inevitable in India, Nilekani on Monday advised stakeholders to have a certification system for skills of their employees in the supply chain.

"I urge you to bring out a certification system to raise the skills of millions of people. This will help you build employment for the industry and can go beyond 10 million in the near future," said Nilekani after releasing the fourth edition of the 'India Food Services' report 2019, compiled by the National Restaurant Association of India (NRAI) here.

Noting that multiple forces play a major part in the growth of the multi-crore industry, he said the Goods and Services Tax (GST), digital payments and food quality were the other major factors that would formalise the industry with an ecosystem of its own.

"They are frenemies. Though brick and mortar always thrive, the restaurants need to make sure they have a good supply chain to support the tight timelines the delivery boys have," Nilekani said.

According to the report, compiled once in 3 years, growing urbanisation, rising income levels and improved investment climate have made the food service sector grow at 11 per cent during the last 3 years and it is estimated to be at Rs 4,23,865 crore in 2018-19.

NRAI's Bengaluru chapter head chef Manu Chandra said the average spend per household per month on eating out has been estimated at Rs 3,586 in the tech hub, which was higher than the national average of Rs 2,500.
Posted by editor-manu-sharma at 10:37 AM