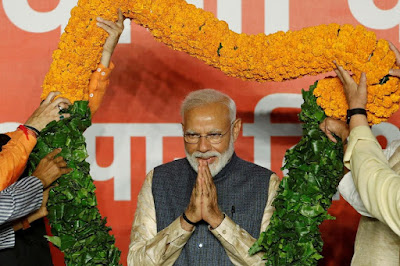 Several corporate honchos, including Anand Mahindra, Adi Godrej, Anil Agarwal and Sunil Mittal cheered as trends pointed towards the BJP and allies returning to power with a thumping majority, saying it was the time for deep reforms entwined with India’s ambition to emerge as a global superpower.

This solid verdict would further strengthen his resolve to drive forward the economic agenda to ensure that the fruits of the economic momentum continue to reach the poor, so visible during the last five years, he added.

Mahindra Group Chairman Anand Mahindra said that Modi is set to become the most powerful democratically-elected leader in the world after the thumping win.

“Size of the country (Land mass+population) X Size of the Economy X Size of the election mandate = Leader’s Power Quotient. By the measure of this crude formula, @narendramodi is about to become the most powerful, democratically elected leader in the world today... (sic),” Mahindra tweeted.

CII Director General Chandrajit Banerjee termed the verdict as a mandate for development and said, “The election results will reinvigorate the strong and constructive government-industry partnership and dialogue for growth built by the government in its previous term...”
Posted by editor-manu-sharma at 2:42 PM