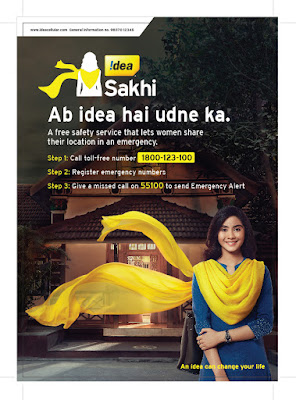 To address the increasingly felt, safety related concerns of women who wish to step out and do more, brand Idea has designed a unique mobile based solution, Idea Sakhi. It is a free of cost service available to all women customers using either prepaid or postpaid services of Idea, across the country. Accessible on both smartphones and basic feature phones, Idea Sakhi offers three extremely useful features - Emergency Alerts, Emergency Balance, and Private Number Recharge.

Launched during the International Women’s Week, this service has already been made available to women customers of Idea across AP & Telangana, Assam & North East, TN incl. Chennai, Kerala, Gujarat, J&K, Maha & Goa, MP & Chhattisgarh, Delhi, Bihar & Jharkhand, Kolkata and Rest of WB, Punjab and Odisha. It will be extended to all 22 circles within this month.

Launching the Idea Sakhi service, Avneesh Khosla, Operations Director - Marketing, Vodafone Idea Ltd. “Technology can help overcome barriers and solve problems in the life of the consumer. With almost half of our population being women, and 59% of them* using a mobile phone, we are in a unique position to extend the benefits of technology for their safety and security. With Idea Sakhi, we are taking forward our long-term commitment of driving inclusion and deploying technology to serve a social purpose.”

Idea Sakhi works on all smartphones and feature phones, and even if the customer does not have any voice or data balance - thus ensuring that the service can be easily accessible to women whenever they need to use it.

A registered Idea Sakhi customer will:

·         Receive a 10-digit proxy number, with which she can recharge her connection at any retail store without revealing her actual mobile number.

To send an Emergency or a Safe Alert, the Sakhi user will need to:

●        Give a missed call to 55100 to send an Emergency Alert. A call, flash and SMS with the location and time details of the Sakhi user will be sent to the Emergency Contacts, alerting them.

●        Call 55100 and press 2 to send a Safe Alert. SMS with the location and time details of the Sakhi user will be sent to the Emergency Contacts, for assistance.

Speaking about the Idea Sakhi service, Sunita Bangard, National Brand Head – Idea, Vodafone Idea Ltd., said, “Brand Idea has always championed causes that help change lives. With Idea Sakhi, Brand Idea wishes to give women the freedom to live their lives and pursue their dreams and understand the need of women to feel safe when they step out of their homes. On this special occasion of International Women’s Week, we are happy to offer Idea Sakhi to the women of India, to feel more confident and safe - Ab idea Hai Udne Ka.”
Posted by editor-manu-sharma at 8:40 PM