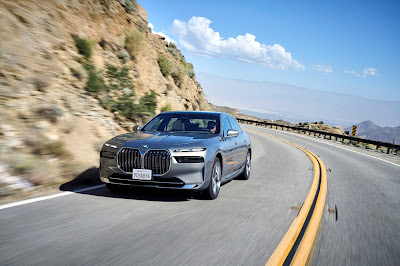 The BMW Group significantly accelerated its ramp-up of electromobility once more in 2022. As previously announced, the BMW Group was able to more than double its BEV sales from 2021 (+107.7%) with a total of 215,755 fully-electric BMW and MINI vehicles delivered to customers. A major milestone was reached when the BMW Group handed over its 500,000th fully-electric vehicle to its new owner towards the end of last year.

“Our strong product line-up is the best response to a challenging environment – and enabled us to more than double our sales of fully-electric vehicles again in 2022,” said Pieter Nota, member of the Board of Management of BMW AG responsible for Customer, Brands, Sales. “We are confident we can build on this success in 2023, as we continue to see particularly high order intake for our fully-electric models,” Nota added.

The BMW Group delivered a total of 2,399,636 BMW, MINI and Rolls-Royce vehicles to customers worldwide in 2022 (-4.8%); a year in which all industries faced headwinds from supply bottlenecks, China’s pandemic lockdowns and the war in Ukraine. The main impact was felt in the first six months of the year, with deliveries down compared to the previous year. Sales increasingly picked up in the second half of 2022. In the fourth quarter, the BMW Group reported significant sales growth of +10.6%, with 651,798 vehicles delivered to customers.

The BMW Group is optimistic about the year ahead. “We will maintain our course for profitable growth in 2023. The clear focus will be on continuing to ramp up electromobility. The next milestone for 2023 is for 15% of our total sales to come from fully-electric vehicles. With the launch of the BMW i5 later this year, we are taking another important step on the road to electrifying our model lineup,” according to Nota.

The future of the BMW Group is electric, circular and digital. One highlight on the road to the NEUE KLASSE was presented at the CES in Las Vegas last week: BMW i Vision Dee represents the BMW Group’s vision of the future digital experience, both inside and outside the vehicle. The BMW Group will provide further insights and glimpses of the revolutionary vehicle concept of the NEUE KLASSE over the course of 2023.

At the same time, the company is pushing forward with further digitalisation of sales and marketing. In future, the BMW Group will rely on direct sales in 24 European markets, with agents acting as sales representatives – this creates the necessary conditions for a seamless transition between the online and offline customer experience. The clear aim of the new agency model is to enhance customer satisfaction and the premium brand experience and to reach out to new, online-savvy customer target groups. The BMW Group’s new agency model will also create price transparency and ensure customers experience the same, consistent offering across all sales channels. Conditions will be put in place this year that will allow MINI to start in 2024, with BMW to follow in 2026. Implementation will be in close cooperation with retail partners.

The My BMW/MINI app is a core element of the sales realignment. With its many features and intuitive user interface, it guides users through the industry’s best customer experience. The My BMW/MINI app serves as the interface for personalised customer dialogue, with about two million users in around 50 markets every single day.

The brand's attractive product portfolio is proving extremely popular with customers. This is reflected in high new orders for models like the BMW X1, iX1*, i4, iX and i7* models. Later this year, the BMW Group will expand its electric lineup with the BMW i5.

Despite the challenges of supply bottlenecks, BMW M GmbH ended its anniversary year with a new all-time high. BMW M reported growth of +8.4% compared to the previous year, with the sale of 177,257 units. At the same time, BMW M made substantial progress with electrification of its product portfolio. The launch of the first two fully-electrified BMW M Performance models, the i4 M50* and the iX M60*, the very first electrified high-performance model, the BMW XM*, and the new M240i Coupé* contributed greatly to this successful year-end. The new edition of the BMW M2 and the recently-released BMW M3 Touring also made a major contribution to sales growth last year.

In parallel with these new additions to the product lineup, BMW M also saw continuing strong demand in its 50th anniversary year for its top high-performance derivatives, the M3 and M4, and its long-established X models. As a result, the outlook for 2023 is very positive for BMW M GmbH, with the promise of further record results to come.

The fully-electric MINI Cooper SE* remained the brand’s best-selling model variant in 2022. A total of 43,744 MINI Cooper SE*s were sold worldwide last year – an increase of +25.5% compared to the previous year.

2023 will be a very important year for MINI. The brand is celebrating 110 years of automotive production at its main plant in Oxford and will be unveiling the first two fully-electric models of the new MINI family.

In the year in which Rolls-Royce Motor Cars unveiled Spectre, the world’s first ultra-luxury electric super coupé, the company also reported the highest sales in its 118-year history, with 6,021 motor cars delivered to customers worldwide (+7.8%). Many regions achieved their highest-ever sales.

Each of those cars was Bespoke: made to the precise wishes of the client, down to the very last detail. The value generated by the marque’s unrivalled Bespoke offering was higher than ever before, with clients now paying around half a million Euros on average for their unique Rolls-Royce.

Global demand remains buoyant across the entire product portfolio, led by Cullinan and Ghost - the order bank across all models stretches far into 2023 with very strong pre-orders for the new all-electric Spectre, following a highly successful world premiere in October. The exceptionally positive client reaction to Spectre comes as the marque prepares to build only fully-electric cars by the end of 2030.

With a total of 202,895 motorcycles and scooters delivered to customers – an increase of +4.4% year-on-year - , BMW Motorrad reported its highest sales in the company’s history. The Europe, Americas and Asia regions, in particular, all posted new sales highs and made a vital contribution to BMW Motorrad’s record sales. The brand’s compelling lineup, with successful products that shape their respective segments, and the market introduction of popular new models, like the fully-electric BMW CE 04, were strong factors in the successful result for 2022.

BMW & MINI sales in the regions/markets

In Germany, 252,087 BMW and MINI vehicles were registered in the full year.

Posted by editor-manu-sharma at 7:55 PM