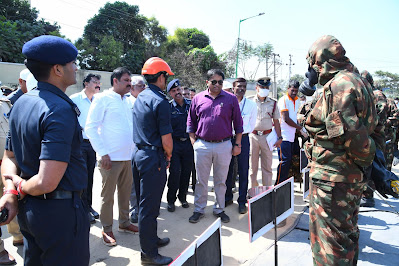 The unloading Pump Discharge Line of the LNG Tanker got damaged after an LNG tanker collided with an existing electric pole and a pipeline construction machinery. Total 19 people sustained injuries at the site. The incident lead to leakage of LNG and formation of a vapour cloud with an impact radius of 65 meters.

In response to this, the site supervisor called the project in-charge and informed them about the incident. Simultaneously, people at the site started rescuing the injured people to a safe place away from the incident area for medical aid to prevent further injuries and causalities.

Available staff of AG&P Pratham rushed to the incident site . After the assessment of the situation, they called  the  control room and Health, Safety, Security & Environment (HSSE) department to get help from mutual aid partner for medical and fire service support. Chief Incident Controller (CIC) was informed of external help as there was the possibility of fire if the gas gets a source of ignition which may lead to loss of life and property and called for immediate medical emergency action.

Chief Incident Controller (CIC) immediately rushed to the incident spot, after assessing the situation, called for the following support:

UPHC and Ambulance for medical emergency

On the directions of the District Authorities, NDRF team reached the incident site and started evacuating people residing within the 65 meters radius from the incident spot. Awareness through various means were made to the nearby public, requesting them not to go towards the incident spot. All the departments like CESCOM, Fire Department, UPHC team, District Administration, Police and RTO department and MCC acted swiftly and controlled the situation within the stipulated time.

Mr Arun Nayak, Regional Head, Mysuru, Mandya and Chamarajanagar, said, “Mock drills help evaluate and assess the situation beforehand and ensure preparedness to take any precautionary measure in a similar scenario. AG&P Pratham always strives for the utmost safety of all the staff and public involved and such mock drills help us achieve just that. We will conduct more such drills in other regions of our operation in the near future.”

The drill ended with a formal de-briefing session where the best practices, learning and insights of the mock drill were discussed. The drill witnessed the systematic and coordinated working of all the partners involved and helped minimise the response time for key check points.

AG&P Pratham is 100% Foreign Direct Investment Company comprising marque shareholders i.e. United States Based I-Squared Capital, Osaka Gas, Japan, Japanese Overseas Investment Corporation and AG&P Global. It has authorizations to develop CGD networks in 12 Geographical Areas covering 35 districts across 8% of India and 64 million people in the states of Rajasthan, Andhra Pradesh, Tamil Nadu, Karnataka and Kerala. In these 35 districts, AG&P Pratham is developing and operating CNG stations for vehicles, piped natural gas to homes, industries and commercial establishments.  AG&P Pratham through its India-wide CGD network, plans to cover more than 278,000 square kilometres and will have over 1,500 CNG stations and more than 17,000 inch-km of steel pipelines. AG&P Pratham has recently won the India 2022 ‘Energy Company of the Year’ at ‘The Economic Times Energy Leadership Awards’.

Posted by editor-manu-sharma at 3:00 PM