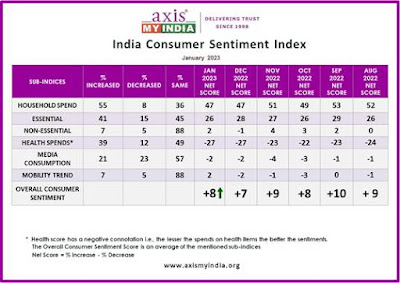 * 50% believe that it is due to the rising inflation

·        Overall household spending has increased for 55%, decrease of -1% over previous month

·        49% mentioned that Flipkart was their most used e-commerce platform

Axis My India, a leading consumer data intelligence company, released its latest findings of the India Consumer Sentiment Index (CSI), a monthly analysis of consumer perception on a wide range of issues. The January report reveals that sentiments have dipped across 3 out of 5 sub-indices. While spends across health products has reduced which is a good indication, sentiments on household spends and essentials also reduced marginally. The survey further highlights that 73% of the consumers believe that their expenses have increased this year compared to the last and 50% believe that it is due to rising inflation.

The January net CSI score, calculated by percentage increase minus percentage decrease in sentiment, is at +08, from +07 last month reflecting an increase by 01 points.

The survey was carried out via Computer-Aided Telephonic Interviews with a sample size of 10019 people across 36 states and UTs. 70% belonged to rural India, while 30% belonged to urban counterparts. In terms of regional spread, 25% belong to the Northern parts while 27% belong to the Eastern parts of India. Moreover, 28% and 20% belonged to Western and Southern parts of India respectively. 61% of the respondents were male, while 39% were female. In terms of the two majority sample groups, 30% reflect the age group 36YO to 50YO

Commenting on the CSI report, Pradeep Gupta, Chairman & MD, Axis My India, said “Our Consumer Sentiment Index shows that the sentiments were highest in H1 of 2022 post which it dipped slightly but overall, we ended 2022 with consumer sentiments better than 2021 & much better than 2020. In H2 overall consumer spending had reached a status quo bias where the keenness to increase consumption had been limited, mainly due to inflation & rise in interest rates. However, a majority mentioning that the current government has been able to handle India's economic situation better than other countries reflects India’s overall performance in 2022. Moving forward, the intent to invest & save more in 2023 reflects the current environment of resilience & cautious growth”.

·        Overall household spending has increased for 55% of families, decreased by 1% compared to last month. The net score which was +48 last month has decreased by 1 to +47 this month

·        Spends on essentials like personal care & household items has increased for 41% of the families, which reflects a decrease by 5%. The net score which was at +28 last month, decreased by two at +26 this month

·        Spends on non-essential & discretionary products like AC, Car, and Refrigerator has increased for 7% of families, which reflects a decrease by 1% from last month. The net score, which was at -1 last month has increased to +2 this month, showcasing an upward sentiment

·        Expenses towards health-related items such as vitamins, tests, healthy food has surged for 39% of the families. This reflects a decrease in consumption by 3% from last month. The health score which has a negative connotation i.e., the lesser the spends on health items the better the sentiments, has a net score value of -27, which remained same as last month

·        Consumption of media (TV, Internet, Radio etc.) has increased for 21% of the families, which is same as last month. The overall, net score, which was at -2 last month, remains the same

·        Mobility has increased for 7% of the families, which reflects an increase by 1% from last month. The overall mobility net indicator score which was at -2 last month, has reported +2 this month

·        In attempt to understanding the investment patterns for consumers during the new year 16% of the people surveyed said that they will invest this year and 40% said that they would invest in MF, Insurance, Gold, Stock Markets etc. and other 16% would invest in real estate. 34% of the people would like to invest for their children’s education. 30% of people resonated the idea to save more this year

·        Exploring sentiments around sports and sporting event 46% mentioned that they liked watching the T20 World Cup, 25% liked to watch the IPL & 16% liked the FIFA WC.

·        Demystifying the nature of consumer’s purchasing power, the survey unveils that 49% shopped through Flipkart and 24% from Amazon. 38% would buy apparels during the year end/ new year sale. 13% mentioned that they looking to buy a 4 or 2-wheeler.

·        The survey also threw light on social media habits of consumers, with 35% of people who surveyed used Facebook more, 25% watched content on YouTube. 52% of people informed that their consumption of mobile/ internet has increased.

·        The survey also highlighted that 62% believe that the current government has been able to handle India's economic situation better than other countries this year and the expectation for 2023 is creation of more employment opportunities.

Posted by editor-manu-sharma at 3:24 PM