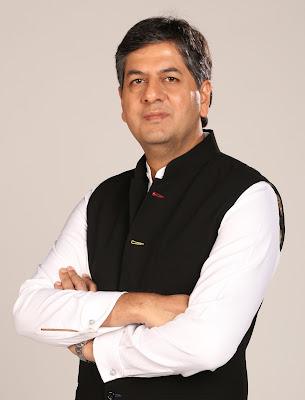 WION, World Is One – India's first and only international news channel and Vikram Chandra, founder of Editorji Technologies, are coming together to present two weekly news shows - 'The India Story' and 'This World' in the new year.

The marquee shows are scheduled for an early January 2023 launch on both WION linear and digital, fulfilling Zee Media's commitment to take India's voice to the wider world.

Explaining the partnership, Zee Media publisher Dr. Subhash Chandra said, "Vikram is arguably the only broadcast journalist who's managed to remain neutral, non-controversial and rise above the 'noise at nine.' That's a rare attribute in these polarised times. He is seen as fair and balanced across the opinion spectrum, which lends a high degree of credibility. People trust his views on a subject, a factor we will build on with these two shows."

The prime objective of the two high-voltage shows on WION presented by Vikram Chandra is to help the world understand major global events from a uniquely Indian perspective. That will be the theme of 'This World' that Vikram Chandra will host on WION, World Is One. To top it, WION's global footprint will provide enhanced reach to 'The India Story,' which has already been running on Editorji, as it seeks to be the definitive programme explaining India to a global audience.

Vikram Chandra said, "I have been away from TV news for several years now, building within Editorji the technologies that I feel can transform video news and information. I had no intention of returning to the noise and din of news programmes dominated by domestic politics. But WION is different. It is the only true international channel out of India – and it has tremendous reach across the world. I look forward to placing 'The India Story' on WION and working with their talented team to make 'This World' a "must-watch" weekly show on global events."

Announcing the partnership, Madhu Soman, Chief Business Officer, WION, who joined the channel in August after a seven-year stint with Bloomberg in Hong Kong, said, "Believe it or not, we connected via LinkedIn a couple of months ago. Vikram didn't know me from Adam. Today, he's a friend and an ally in WION's journey, and I'm sure our partnership will make 'This World' sit up and take note of 'The India Story' as we seek solutions."

Two pedigreed professionals with no prior connection coming together organically is a testament to WION's commitment to the cause of neutral and non-controversial journalism. In addition, Vikram Chandra coming on board further strengthens WION's efforts to position India at the high table of global diplomacy.

"My conversations with Madhu were a breeze, and we are both clear that India, with its billion-plus population, needs its own voice in the world. That's where I felt WION offered a wonderful opportunity to bring the brightest minds together on our shows," added Vikram Chandra.

In addition to these two shows, the Zee Media Corporation Limited (ZMCL) and Editorji Technologies will collaborate on programmes for social transformation, combining Vikram's experience in programmes like 'The Greenathon,'  'Save Our Tigers' and 'Banega Swacch India'  together with the massive reach of Zee Media including WION, Zee News and India.com.

Apart from presenting shows like 'The Big Fight,' '9 o'clock News' and 'Gadget Guru,' he has also been successful in introducing pioneering innovations such as news on mobile phones, live streaming of videos, etc.

Vikram won the title of 'Global Leader for Tomorrow' by the World Economic Forum in Davos, the Indian Television Academy Award for 'Best Anchor for a Talk Show,' the Hero Honda Award for 'Best Anchor-person' and the Teacher's Achievement Award for Communication, along with featuring in the top 20 on the Impact list of the Digital Power 100.

WION (World is One) is an English global news brand from Zee Media with a presence in over 190 countries. It focuses on delivering global news from an Indian perspective.

About Zee Media Corporation Ltd: ZMCL is one of India's leading media and entertainment companies with a strong presence in the news and regional entertainment genres with 13 news channels in 7 different languages, touching more than 528+ Million viewers through its linear and digital properties like Zeenews.com, dnaindia.com, india.com and others.

Posted by editor-manu-sharma at 1:17 PM