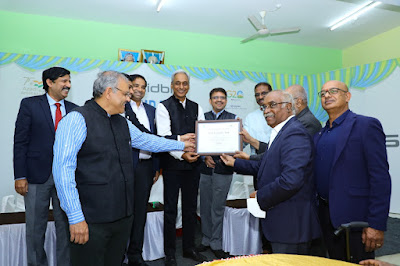 Small Industries Development Bank of India (SIDBI) has inaugurated its first green-rated building in Mysore, as part of its ambitious goal of achieving facility-level carbon neutrality commitment by 2024. Shri Sivasubramanian Ramann, CMD, SIDBI along with other officials inaugurated the platinum-rated Mysore Branch office awarded by Indian Green Building Council (IGBC). Mr. Ramann stated that SIDBI is taking pioneer steps in India to turn the Indian banking sector green and has also decided to reduce its carbon footprint in a phased manner and eventually become carbon neutral by December 2024 to lead by example. He further informed that SIDBI endeavors to position itself as the green bank of India attending to the green financing and non-financing needs of the MSME ecosystem. This includes direct and resources support to institutions focused on the green theme. SIDBI has already launched project GRiT for the sustainable emergence of artisan clusters. On the thought leadership front, SIDBI has set up GIFS and launched BEE Unnatee tool easing decisions by MSMEs to go green and also standardize energy audits.

IGBC is an associate of the Confederation of Indian Industry (CII) through its Green Interior Rating Program awards green certification based on eco-design approach, water conservation, energy efficiency, interior materials, indoor environment, and innovations in interior design. The certification is awarded under four broad categories such as (i) Certified – Best Practices, (ii) Silver – Outstanding performance, (iii) Gold – National excellence, and (iv) Platinum – Global Leadership. Out of the 4 levels of certification, the Platinum level is the top-grade rating.

Speaking on the occasion Shri K S Venkatagiri, ED, IGBC congratulated SIDBI for taking a lead in promoting the ESG goals. He also stated that they would want to have greater association going forward to ensure that together we contribute to the environment and reduction in carbon footprints.

The occasion was also graced by Shri Rajendra K V, DC, Mysuru who also appreciated the steps taken by SIDBI. He hoped that as anchor promoters of MSME ecosystem sidbi lead shall make others to follow and mainstream this greening strategy.

SIDBI has positioned itself as a Principal Financial Institution in the Green Finance Market of the country. The bank has been proactively pursuing a green investment portfolio in the Micro, Small, and Medium Enterprises (MSMEs) lending in areas of energy efficiency, low carbon, and green financing projects across the MSMEs since 2005. Through its various Green Financing products and other developmental activities, SIDBI enables the manufacturers and service providers in the MSME sector to adopt green energy efficient technologies leading to a positive impact on the environment and sustainability. SIDBI has taken a number of proactive green measures recently including its commitment to achieving carbon neutrality, in line with the Government of India’s ambitious climate ambitions and actions. The Bank has also constituted a Board level committee on Sustainable Development Goals to oversee its green initiatives.

Since its formation in 1990, SIDBI has been touching lives of citizens across various strata of the society through its integrated, innovative and inclusive approach. Be it traditional, domestic small entrepreneurs, bottom-of-the-pyramid entrepreneurs, to high-end knowledge-based entrepreneurs, SIDBI has directly or indirectly impacted the lives of Micro and Small Enterprises (MSEs) through various credit and developmental measures.

Posted by editor-manu-sharma at 7:54 PM