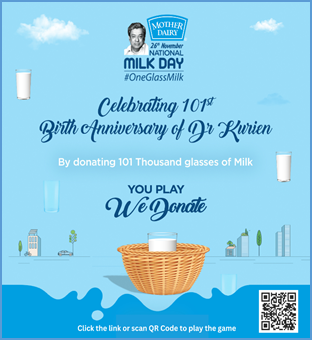 ~The Company has rolled a digital game #OneGlassMilk, encouraging consumers to step forward and contribute towards achieving the goal.~

Mother Dairy, India’s leading dairy player, has pledged to distribute 101,000 glasses of milk to the underprivileged on the occasion of National Milk Day 2022, marking the 101st birth anniversary of Dr Verghese Kurien, also known as the father of India’s White Revolution.

The birth anniversary of Dr. Verghese Kurien, the Father of White Revolution in India, is celebrated as the National Milk Day every year across the country. His "Billion-Litre Idea" – Operation Flood – is the world's largest dairy development programme that made dairy farming as India's largest self-sustaining industry and the largest rural employment provider. It made India the world's largest milk producer from a milk- deficient nation. Mother Dairy was established in 1974 during this noble initiative of Operation Flood, under the able leadership of Dr. Kurien.

Calling out for participation of its consumers and well-wishers, Mother Dairy has also rolled out a digital game – #OneGlassMilk Game, which can be played on https://www.motherdairy.com/OneGlassMilk/. Through this, Mother Dairy is calling out everyone, seeking support from across the country, to join them in the movement and help them achieve the goal.

Talking about the initiative, Mr. Manish Bandlish, Managing Director, Mother Dairy said, “We are indebted to Dr. Kurien for his vision and making India the largest producer of milk. His contribution to the growth of the Indian dairy industry cannot be expressed in words. We began this initiative in 2019 with an aim to spread the importance of milk and milk products, urging public-at-large to promulgate the practice of offering one glass milk as a source of nourishment.”

Mother Dairy will distribute 101,000 glasses of milk in collaboration with leading NGOs – The Akshaya Patra Foundation and Apna Ghar – across Delhi NCR.

Mother Dairy was commissioned in 1974. It is now a wholly owned subsidiary of the National Dairy Development Board (NDDB). It was established under the initiative of ‘Operation Flood’, world's biggest dairy development program launched to make India a milk sufficient nation. Today, Mother Dairy is a leading dairy player which manufactures, markets & sells milk and milk products including cultured products, ice creams, paneer, ghee, etc. under the ‘Mother Dairy’ brand. The Company also has a diversified portfolio with products in edible oils under the ‘Dhara’ brand and fresh fruits & vegetables, frozen vegetables & snacks, unpolished pulses, pulps & concentrates, etc. under the ‘Safal’ brand. Mother Dairy, through its brands, has a national footprint across all major cities in India, offering a delectable range of products to its consumers.