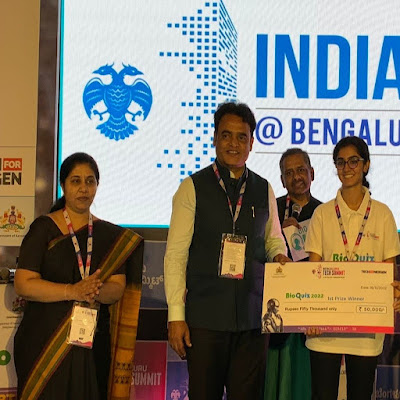 * 25th edition of Bengaluru Tech Summit 2022 was organised by Department of Electronics, IT, BT and S&T, Government of Karnataka

A B.Sc. Biotechnology student Ms. Mythili Padavu from Manipal School of Life Sciences, Manipal Academy of Higher Education who is in her 5th semester won the First Prize in the BioQuiz -2022 National finals to become the BioQuiz National Winner 2022. The national level quiz program was part of the Asia’s most prestigious Bangalore Tech Summit, organised by the Department of Electronics, IT, BT and S&T, Government of Karnataka and was virtually inaugurated by Shri Narendra Modi, Honourable Prime Minister of India.

BioQuiz 2022 was organised as part of 25th edition of Bengaluru Tech Summit-2022 and was India's largest National Level Quiz on Biotechnology. It was held in three rounds: a preliminary round on 5-6th November, the Zonal round on 10th November and the Grand Final Round was conducted on 18th November 2022. All undergraduate students irrespective of their specialization across the country were eligible to take part in this BioQuiz.

The objective of this quiz was to create awareness about the fascinating world of Biotechnology, encourage students to delve deep into the subject and showcase to the world the talent in this significant field of Life Sciences.

Speaking about the achievement, Lt. Gen. (Dr.) M. D. Venkatesh, Vice Chancellor, MAHE said, “Congratulations Mythili on being declared the National Winner at BioQuiz 2022 and I wish you many more accolades in the future. We are extremely proud and delighted of her success as she has won India's largest National Level Quiz on Biotechnology. “

Ms. Mythili won the first preliminary round to join 6 students in the Southern Zonal Finals and qualified for the Grand Finals where four winners from four different zones across India competed for the coveted prize. The finals were challenging and exciting event, but Mythili ended up as a comfortable winner and was declared the BioQuiz Champ. She scored 250 points in the finals with the first runner up scoring 150 points. She was awarded a certificate and a cash prize by the Hon'ble Minister Dr. C. N. Ashwath Narayan for winning the BioQuiz 2022.

Dr. Satish Rao, Director of Manipal School of Life Sciences, said, “What a commendable performance and dedication was shown by Mythili, her hard work has brought laurels to the Institute.  I am obliged to see such deserving and talented student from our institute. It is not easy to defeat the opponent with 250 points in the finals.”

Posted by editor-manu-sharma at 6:18 PM