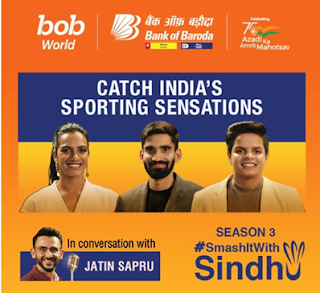 On National Sports Day 2022, Bank of Baroda (Bank) released the third edition of #SmashItWithSindhu to celebrate the achievements and to support the undying spirit of the Indian sporting fraternity. The latest edition is bigger and better with the Bank bringing together ace shuttler Kidambi Srikanth and India’s young batting sensation Shafali Verma joining Olympic medalist PV Sindhu in an exciting and fun conversation with television host Jatin Sapru.

India celebrates National Sports Day on August 29, the birth anniversary of hockey wizard Major Dhyan Chand and the Bank has been hosting #SmashItWithSindhu to mark this occasion for the past couple of years. Continuing with this tradition and to celebrate the success of our athletes at the recent Commonwealth Games, Bank of Baroda brought together three of India’s biggest sports stars on one stage.

Shri Ajay K. Khurana, Executive Director, Bank of Baroda said, “As India celebrates 75 years of independence, one of the many areas where the country has taken rapid strides is in the international sporting arena. Our sports stars across sporting disciplines have made the nation proud and their efforts have also resulted in the growing popularity and mainstreaming of a diverse range of sports. At Bank of Baroda, we strongly believe in extending our support to athletes at an early stage, at the beginning of their careers when they need it the most and building a long-term partnership. On National Sports Day, we are pleased to release #SmashItWithSindhu Season 3 with three of India’s champion players – Sindhu, Srikanth and Shafali.”

The trio discussed a range of issues with Jatin Sapru, including their experience at the recently concluded Commonwealth Games.

On being a flag bearer at the Games, PV Sindhu said, “It was such a wonderful feeling representing India and being a flag bearer. Holding the flag and leading the Indian contingent into the stadium when they called out our country’s name gave me goose bumps. It was a once-in-a-lifetime experience. There were also a lot of Indians who had turned up to support all of us and it was exciting and a truly memorable experience.”

Speaking about the energy that the Indian athletes showcased during the Games, Kidambi Srikanth said, “There were so many athletes representing India and I could see the team supercharged to give it their all. Everyone was eager to do their best for the country and to prove themselves as athletes. We went with a winning mentality. The zeal and enthusiasm of the athletes in our contingent was inspiring.”

Shafali Verma spoke about the team spirit in the locker room. “Seeing the support youngsters are getting is a great experience. The guidance from seniors helps improve our performance and grow as athletes.”

The engaging conversation also included discussions about travel hacks, cheat meals, coming home during breaks, family, training, keeping in shape, friendships and shopping among other topics. The discussion was followed by a fun quiz as well as an entertaining discussion on social media and memes.

About Bank of Baroda

Founded on 20th July, 1908 by Sir Maharaja Sayajirao Gaekwad III, Bank of Baroda is one of the leading commercial banks in India. At 63.97% stake, it is majorly owned by the Government of India. The Bank serves its global customer base of over 150 million through over 46,000 touch points spread across 17 countries in five continents. Through Its state-of-the-art digital banking platforms, it provides all banking products and services in a seamless and hassle-free manner. The recently launched bob World mobile app provides customers with a saving, investing, borrowing, and shopping experience, all under one single app. The app also serves non-customers by enabling account opening through video KYC. The Bank’s vision matches its diverse clientele base and instills a sense of trust and security. It is moving well in that direction and bob World is a testimony of its roadmap towards Digital Transformation.

Posted by editor-manu-sharma at 6:48 PM