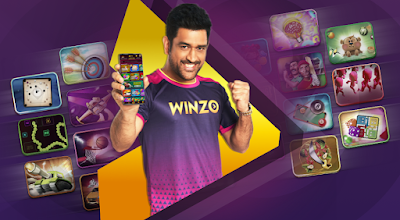 India’s largest social skill gaming platform, WinZO, hereby announces the onboarding of one of the global cricketing stalwarts who facilitated India’s emergence as a cricketing superpower and 2-time world cup winning captain, Mahendra Singh Dhoni as its brand ambassador. WinZO, which has successfully garnered a massive and loyal user base of over 75 million gamers and a portfolio of 100+ games within a span of just 36 months, has cemented its position as India’s Social Gaming pioneer. As a brand that envisions establishing India as the Gaming Powerhouse of the world, WinZO joining hands with a household name and revered star in MSD is bound to elevate the awareness as well as engagement in the country’s social gaming community to the next level and pave the way for establishing social/interactive gaming as the most preferred form of entertainment.

The partnership reiterates the company's aggressive growth and branding strategy to establish itself as the most trustworthy household interactive entertainment brand. MSD will feature as a part of WinZO’s upcoming multi-channel and multi-modal marketing and branding campaigns, the production of which is currently underway. Coming from humble origins and a small town of Ranchi in Jharkhand, MSD rose to prominence in World Cricket having led the Indian cricket team to three ICC title wins and multiple other coveted victories. MSD’s life journey is an instant connection with WinZO’s core value proposition of instilling the values of relatable, performance, and winning. Along with a gaming giant in WinZO, ‘The Thalaiva’ will be seen embarking on a journey to the top of the Global Gaming Industry in the near future by breaking barriers and altering perceptions via relevant, inclusive, and targeted campaigns.

Speaking about his association with WinZO, Mahendra Singh Dhoni, Brand Ambassador, WinZO said, “Winning is always about mindset and attitude. I am thrilled to partner with the like-minded team at WinZO in their growth journey to disseminate this attitude of winning across the country. Being an avid gamer myself, I connect very closely with the vision of the company and am excited to be associated with the leaders of this rapidly growing trillion-dollar industry. Together with WinZO, we will strive to make this Indian brand become the global powerhouse of gaming and entertainment.”

Paavan Nanda, Co-Founder, WinZO said “Mahendra Singh Dhoni is one of the names that unite India in a true sense. His relatable and inspiring story and humble personality makes him a beloved and widely followed celebrity who personifies trust and success. He has won all there is to be in the world of cricket as India’s captain. We at WinZO are thrilled to have the ‘win-machine’ onboard. Partnership with Mr. Mahendra Singh Dhoni who has proved himself to be a game-changer, a composed leader, and a winner surely resonates with the aspirations of the Indian youth and WinZO’s users. Together we aspire to take social gaming to the masses of this country cutting across age and gender.”

Posted by editor-manu-sharma at 8:06 PM