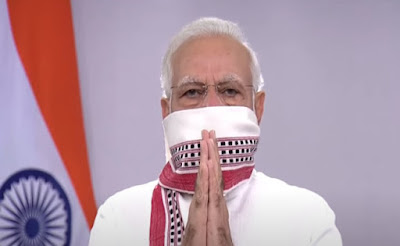 Axis My India, a leading consumer data intelligence company, released its latest findings of the India Consumer Sentiment Index (CSI), a monthly analysis of consumer perception on a wide range of issues. The month of February reveals that 50% agrees that the results of the upcoming 5 state elections will have a visible impact on the 2024 National elections. 41% believe that PM Narendra Modi is best suited to handle India’s internal & external security. Majority respondents are also certain that ‘start ups’ will be the backbone of New India in the coming 10 years. The survey also reflects consumer’s positive outlook towards RBI’s proposed digital currency.

The March net CSI score, calculated by percentage increase minus percentage decrease in sentiment, was up to +9, from +7 last month and reflecting an increase in the net score post the February drop because of the Omicron scare.

Commenting on the CSI report, Pradeep Gupta, CMD, Axis My India, said, “With greater relaxation from the government in terms of mobility and increased encouragement from corporates to return to physical setting, we can witness the country’s effort to go back to the ‘old normal’. PM Narendra Modi being voted as the leader best suited to guide India’s internal & external security in the wake of the current Russia-Ukraine crisis is also not a surprise. Attracting consumers’ interest is also the five state elections, as they are expected to have an overall impact on the country’s economy. In addition, positive outlook towards RBI’s proposed digital currency also reflect the nations wider acceptance towards this change.”

·        The CSI – Survey furthermore captured consumer’s views on upcoming five state elections of Uttar Pradesh, Punjab, Uttarakhand, Manipur and Goa. A huge majority of 50% strongly believe that the results of these 5 state elections will have a considerable impact on the 2024 National Elections. These are the views of people residing across the nation & not just the election states.

·        In an attempt to understand consumers view on a series of Budget announcement, Axis My India discovered that 68% believe that RBI’s proposed Digital currency/Digital Rupee will encourage safer and secure mode of online transaction/ transfer of funds. This positive outlook could mean a wider acceptance of the proposed digital currency upon its introduction. A minority of 13% and 6% believes that the digital rupee will ensure reduced dependency on cash/physical notes; and stimulate increased global as well as rural transaction respectively.

·        Exploring consumer’s views on the start-up ecosystem, the survey discovered that 85% believes that start-ups are going to be the backbone of ‘New India’.

Axis My India is India’s foremost consumer data intelligence consultancy that has revolutionized the field of election polling in the country, with an accuracy rate of ~92% spread across 28 states and 8 union territories and 2 national elections. The company has a presence in over 737 districts and has touched 85 million Indian households. It counts some of India’s largest corporations, state governments as well as Union Government in its clientele and offers a repertoire of research related services, including consumer insights, product validation, market segmentation, on-ground brand activation, personalized media solutions and micro marketing. The company publishes an annual Consumer Trust Index – spread across 45 consumer and product categories, and 1 million respondents.

Posted by editor-manu-sharma at 3:31 PM