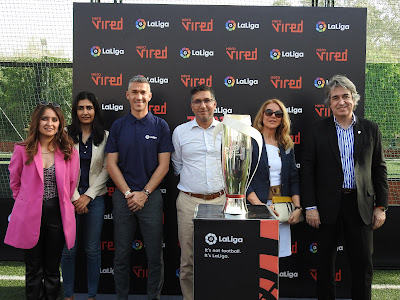 * Starting today, all gamers and eSports enthusiasts who wish to participate in the eLaLiga Trophy can register via the Hero Vired website

*  This is the first time, eLaLiga is being powered by a partner worldwide

Hero Vired, India’s premium EdTech company by the Hero Group, today announced the launch of the first-ever eLaLiga challenge in India titled ‘eLaLiga Trophy powered by Hero Vired’. Inaugurated by Spanish Legend, Luis Garcia at a grand event in Delhi, registrations for the eSports championship have been opened starting today. The tournament will be held between 9th and 26th April 2022, with the national finale hosted LIVE on 8th May 2022.

The tournament is brought to India, for the first time, by Hero Vired as an extension of the partnership between Hero Vired and LaLiga. Headquartered in Madrid, LaLiga is Spain’s top division football league and one of the world’s most popular professional sports leagues. As its Official Knowledge Partner, Hero Vired will help LaLiga connect with its premium audience base ensuring a wider reach through this high-impact association in India.

Commenting on the launch, Akshay Munjal, Founder and CEO, Hero Vired, said, “eSports is rapidly gaining popularity, and as per a report, India will have over 1.5 million active eSports players by FY25. We are delighted to contribute to this fast-growing ecosystem by bringing this challenge to India. From K-12 through higher education, eSports provides an inclusive environment where students can thrive and expand their talent. Our exclusive collaboration with the League and the eLaLiga Trophy provides Indians and Hero Vired learners with an incredible opportunity to access global experience and opens up pathways to new possibilities.”

“This launch and partnership were always meant to be, football blends seamlessly with data science and finance markets, and gaming with developers. In addition, this is our first step to launch the one-of-a kind gaming program in India soon”, Munjal further added.

This new gaming challenge will feature amateur players and influencers from across all geographies of India. Players will compete in online tournaments, with the best participants getting the chance to win official merchandise, and a ‘Money Can’t Buy Experience’ to Spain.

Speaking about eLaLiga Trophy, Jose Antonio Cachaza, Managing Director, LaLiga India, said, “At LaLiga, we always look at partnering with leading brands, and that’s why we chose Hero Vired as our official Knowledge partner to bring this internationally acclaimed challenge to India. Our shared vision and a mutually rewarding relationship bring the best of education and sports worlds together and complement one another. Creating a meaningful connection with the target audience that has shown a craving for football, Hero Vired will help LaLiga reach new audiences through this challenge and association.”

All interested fans can find more details about the eLaLiga Trophy powered by Hero Vired and register via www.herovired.com/elaliga

Luis Garcia, LaLiga Ambassador, and ex-FC Barcelona player said, “Esports has always been a big part of football. It's a terrific opportunity for fans to get involved with their favorite sport and compete with their friends and other players from all around the world. I've observed my younger relatives and friends' love for esports, and I feel it helps gamers get more familiar with different sports, teams, and athletes from a young age. The emergence of esports has helped to improve sporting fandom, and the eLaLiga Trophy will give the sports and gaming enthusiasts in India a much-needed boost.”

Hero Vired and eLaLiga will continue to establish similar events and opportunities in India to bolster eSports and gaming-related learning in the country. eLaLiga Beat the Best, is the new international competition by LaLiga and EA, is currently held in thirteen countries with two challenges in the United States and China. The competition further elevates the excitement of eLaLiga EA SPORTS FIFA 22 and FIFA Online tournaments across the world. This format follows the lead of the 20/21 eLaLiga Fan Cup, which attracted 21,000 registered players and generated 3 million impressions on social media, the first step in the internationalization strategy developed by eLaLiga.

Through this collaboration, Hero Vired and LaLiga aim to increase awareness of the need for upskilling and continuous learning, and also bring to light their much-awaited program in gaming. eLaLiga is Hero Vired’s flagship gaming tournament through which the company aims to help users develop the requisite skills for emerging opportunities in eSports and gaming in the jobs for the future.

Hero Vired is India’s premium EdTech company for professionals and higher education aspirants. The company is a startup venture of the Hero Group that offers career-relevant programs, in partnership with world-class universities to make learners more competent and industry-ready for emerging jobs and skills of the future. With best-in-class short and long-term learning programs, Hero Vired offers overall professional development via skill-based programs and courses that are imperative to a learner’s growth in India’s rapidly evolving digital economy.