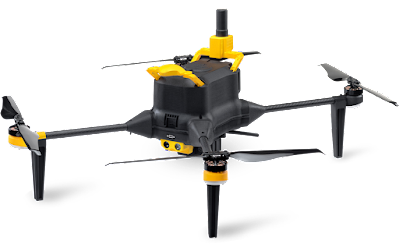 * Under this deal, Grip will enable AUS to build new revenue streams by leveraging lease financing and facilitating more than 50 drones.

AUS is the first Indian company to develop professional drone solutions for enterprises and get a small category (> 2kg weight) drone certification from the DGCA, India. The company was established in 2013 and has so far, mapped more than 5 million acres, 15000 villages and 35 cities. It has further covered more than 250 mines and 350 stockyards for mining, metal, and power companies like Tata Steel, Hindalco, and Coal India, etc. Under this deal, Grip will enable AUS to build new revenue streams by leveraging lease financing for more than 50 drones.

Commenting on the announcement, Nikhil Aggarwal, CEO & Founder, Grip, said, “India's commercial drone market has grown leaps and bounds in the past few years witnessing growing adoption across several verticals such as mining, filming & photography, and agriculture in the country. We’re super excited to facilitate a first-of-its-kind lease financing deal to help scale India’s drone segment. AUS is a leading company in drone manufacturing and provides services like surveying, mining, mapping, etc. We are committed to establishing Grip as a platform that provides alternative sources of capital for high-growth companies like AUS.”

AUS offers end-to-end integrated solutions for drone applications, providing the drone, an operator and a cloud platform for data analysis. The company is profitable and has seen tremendous growth in revenue - 250% annually for the past 3 years.  It is currently the leading player with the highest market share in the commercial drone market in India. It is one of the three companies whose product has been shortlisted to map India’s 6 lakh villages by the Government of India.

Commenting on the partnership with Grip, Vipul Singh, CEO & Co-founder, AUS, said, “Drones are fast becoming a vehicle of development and financial inclusion in India. Our drones are making an impact on some of the largest mining & metal brands and large-scale infrastructure players in India, including Tata Steel, Hindalco, NTPC, Coal India, and others. We are also a key player for the SVAMITVA scheme of the Ministry of Panchayati Raj, for the digitization of land records in rural India. The drone sector is growing in leaps and bounds, and we are happy to partner with Grip to provide this investment opportunity to retail investors.”

The development comes on the heels of the honorable Finance Minister emphasizing the positive role being played by the drones in the Digital India vision and further announced the launch of the Drone Shakti program to promote the development, usage, and impact of drone technology on primarily Rural India.

India’s drone segment is projected to grow at a CAGR of 12.4% by 2025 and reach a value of $5Bn. Mapping & surveying holds the majority of revenue share due to the high accuracy and quality provided by such drones with relatively less manpower and low cost. Additionally, government initiatives such as the Make in India, which promotes the domestic manufacturing of drones, are fuelling the growth of the commercial drone market in India.

AUS has been leading the drone technology evolution in India for commercial application since its inception at IIT Kanpur in the year 2013. AUS was the first start-up to build and deploy PPK GPS-based Survey grade fully autonomous drones in India. AUS is also the first company to get a small category drone certified by DGCA. Apart from pushing the technology benchmarks and boundaries for enterprise-grade drones, AUS has intensively worked upon data collection, processing, and analytics techniques to increase the meaningful impact and value addition of the data collected by the survey-grade drones. AUS is backed by some of the well-known early-stage deep tech investors like the Auxano Capital, KARSEMVEN fund, StartupXseed Ventures, 3one4 Capital, GrowX ventures, 500 Durians, and Ashok Atluri (MD of Zen Technologies), etc.

Grip is building a new category of investment options for the new-age Indians. Millennials don’t communicate, shop, pay, entertain or work as the previous generation - then why should they invest the same way?

Started in June 2020, Grip has seen a 35% month-on-month growth to become one of India’s fastest-growing destinations for nonmarket-linked investments. Today, Grip offers a unique investment option of leasing assets to some of India’s most disruptive businesses like Udaan, Stanza Living, Furlenco, Bounce, Blue Tokai, Everest Fleet, IPLElectric, FabAlley, and LetsTransport.

Grip was founded by Nikhil Aggarwal, Vivek Gulati, and Aashish Jindal. Prior to Grip, Nikhil co-founded and served as COO of Chalo, India’s leading mobility startup for city buses. He started his career at HSBC and then worked for 6 years with the Investment Banking team at Morgan Stanley, India. Nikhil also currently serves as a Consultant to the Transport Practice at the World Bank. Vivek was previously part of the business development team at Chalo and led business development for the expansion team for OYO Hotel’s domestic and international operations. Aashish Jindal previously worked in product and project management roles with ICICI Bank, Pepperfry, and Chalo.

Posted by editor-manu-sharma at 1:30 PM