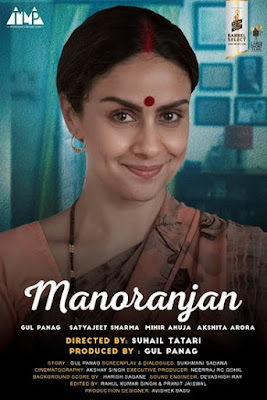 Royal Stag Barrel Select Large Short Films today premiered ‘Manoranjan’. The short film features critically acclaimed actor Gul Panag, who is also the producer of the film, as Lalita, a simple homemaker whose captivating storytelling ability forms the essence of this psychological thriller. The short film, directed by Suhail Tatari, who has directed critically acclaimed films like Ankur Arora murder case and Summer 2007, narrates the story of Lalita who lives a fairly ordinary life in a small town in Rajasthan until the arrival of an unplanned guest thwarts the family’s travel plan and stirs up a series of spooky events, leaving the audience wanting for answers at every step.

The highlight of the film is the well-defined character sketch of the protagonist, Lalita, who singlehandedly keeps the audiences at the edge of their seats at all times. The movie successfully creates a sense of mystery and spook, without any ‘jump scares’ and the credit for the same sits with the writer of the movie, actor-writer Sukhmani Sadana. Sukhamni has written films for Bollywood, OTT platforms and has acted in several popular web-series in the past. From Lalita’s unpretentious relationship with her husband Satyanarayan, a railway station master, to her confident demeanour with 18-year-old houseguest Chirag, the movie Manoranjan successfully manoeuvres through varied relationships of Lalita while maintaining a sense of intrigue.

Talking about the film, actor Gul Panag said, “I’m quite glad that a platform like Royal Stag Barrel Select Large Short Films is allowing such contemporary stories to see the light of the day. This movie is a riveting suspense that will keep the audiences hooked till the last frame. It’s definitely a refreshing take on the spooky genre and I am confident that the audience will enjoy every second of this film. This is my second movie with Royal Stag Barrel Select Large Short Films and post the success and reaction to my last film, it was an obvious choice from my end to associate with the platform again for ‘Manoranjan’. I am looking forward to more such future associations with them”.

Talking about the movie, Director Suhail Tatari said, “I am thrilled to present Manoranjan to my audience and I am more than privileged to release it with Royal Stag Barrel Select Large Short Films. It’s an intricate web- like plot woven around the life of the character Lalita and the mystery unfolds slowly and steadily in the film, keeping one intrigued till the end. I believe that Royal Stag Barrel Select Large Short Films is the perfect platform to celebrate such fresh scripts and the platform has truly been the catalyst  for the evolution short films in India.”

“Gul came up with the concept for Manoranjan, which was subsequently fleshed out from there. As soon as I heard the idea, I was on-board, especially given the genre being my personal favourite. It's a multi-layered tale with a spooky feel to it. The Royal Stag Barrel Select Large Short Films is a remarkable platform for such unique and contemporary storytelling,” said writer, Sukhmani Sadana.

The movie will be first exclusively premiered on Royal Stag Barrel Select’s Large Short Films Youtube channel: https://www.youtube.com/user/LargeShortFilms , a platform to watch the most original and inspiring short films made by some of the finest directors in India.

Royal Stag Barrel Select Large Short Films has become ‘the’ destination for Indian short films where viewers can experience the taste of great films. The platform has collaborated with successful storytellers from Bollywood who truly stand for originality and creativity. Large Short Films has evolved to create an ecosystem for aspiring directors to feature along mainstream Bollywood directors and still be able to create a niche for themselves in the industry.

Royal Stag Barrel Select Large Short Films has released some of the most prodigious award-winning short films with renowned artists and directors from the industry which truly reflects originality, imagination and perfection.  Ahalya, Interior Café - Night, Ouch, Chutney, Anukul, Mumbai Varanasi Express, Khool Aali Chithi, The School Bag, Bruno and Juliet, ‘Shunyata’, Juice, Maa, Chhuri, Her First Time and Iktarfa are some of the phenomenal films that have been released on this platform. Royal Stag Barrel Select Large Short Films as a platform for original short films has been the pioneer in popularizing this genre of filmmaking.

Royal Stag Barrel Select is the premium offering of Royal stag for the discerning consumer who seeks an evolved taste. It is for the young, confident, progressive and inspiring individuals who have tasted their first success, want to be seen as the one with discerning taste, evolving in their journey of life.

Posted by editor-manu-sharma at 7:08 PM