48% Of Consumers Are Confident That The Omicron Scare Won’tIimpact Their Financial Securities: Axis My India – CSI 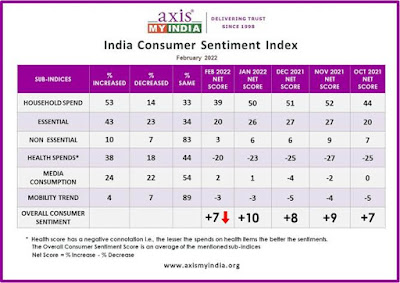 * Overall household spends have dropped across the essential & non-essential categories

* Slight dip on expenditure related to health items, net score at -20 as compared to -23 last month

* Mobility remains the same for 89% families, going out for short vacations, malls, restaurants etc. inspite of the Omicron scare.

Axis My India, a leading consumer data intelligence company, released its latest findings of the India Consumer Sentiment Index (CSI), a monthly analysis of consumer perception on a wide range of issues. The month of January reveals highest ‘same consumption’ in the overall household spends indicator as compared to last five months at 33%. In terms of essential items, 43% of the families reflect increase spends while in terms of non-essential items, 10% of the families reflect increase spends. However both essential and discretionary spendings depict the lowest surge in the last five months. A majority of 48% are further confident of their financial health inspite of the new variant of Covid-19. Finally, 89% are going out the ‘same’ for short vacations, mall and restaurants inspite of the Omicron scare.

The February net CSI score, calculated by percentage increase minus percentage decrease in sentiment, was down to +7, from +10 last month in lieu of the observed drop in household spending both across the essential and non-essential categories since the past 3 month, which was further accentuated by the Omicron scare in January.

This month, Axis My India’s Sentiment Index further investigated the influence of advertisement on purchase decisions, parallel viewing behaviour with reference to television and mobile phones and consumer’s approach to health and fitness. The survey also delved deeper to understand various facets of financial behaviour, these include apprehensions with sharing financials/personal information online, outlook on the impact of omicron on financial security and gender based investment management perceptions.

Commenting on the February report, Pradeep Gupta, CMD, Axis My India, said, “The survey captures consumer’s apprehension yet preparedness and confidence to the advent of Omicron. While essential, non-essential and health related increased expenditures witnessed a dip, consumers at the same time have expressed their confidence of not being financially impacted by the 3rd Wave. Moreover, in our attempt to discover consumer information consumption habit, we witnessed a growing possibility of shared space competitiveness between TV and online for influencing ad based purchase decisions. However online space unlike TV is an interactive platform and thereby possess the challenges of ensuring security and safety of data shared by consumers. Overall with the nation’s sentiments resuming back to slow and steady normalcy and more opportunities opening up within the media space, advertisers and marketers are in a sweet spot and should thereby leave no space untouched.”

* Overall household spending has increased for 53% of families which reflects a 6% dip from the last month. Overall spending remains the same for 33% of the families which is the highest in the last five months. The net score has dropped from +50 to +39.

* Spends on essentials like personal care & household items has increased for 43% of the families showcasing a surge in northern and southern part of India, however this is also the lowest surge in the last five months. Spends however remain the same for 33% of the families (same as last month). The net score which was +26 last month is at +20 this month.

* Spends on non-essential & discretionary products like AC, Car, Refrigerator has increased for 10% of families, indicating an even lower percentage than the last 5 months. Expenditure nevertheless remains the same for 83% of the families a surge by 5% from last month. This is majorly reflected in the sentiment of people living in Eastern and Northern part of India. The net score which was at +6 last month is at +3 for the month.

* Consumption on health-related items more or less remains the same for 44% of the families, while a surge is witnessed among 38% of the families. In comparison to last month, the ‘increase’ consumption indicators represents an overall dip by 2%. The health score which has a negative connotation i.e., the lesser the spends on health items the better the sentiments, has a net score value of -20 as compared to -23 last month

* Consumption of media like TV, Internet, and Radio has increased for 24% of the families, same as last month. Consumption remains the same for a majority of 54% families, the highest in the last five months. This is reflected among 18-25 Year olds of northern part of India. The overall, the Net score of this month is at 2 as compared to 1 for the previous month.

* 89% families said that they are going out the same for short vacations, mall and restaurants as compared to 85% of families last month. Reflecting the view of 89% of the families, this has been the highest percentage in the last five months. However, only 4% of families recorded increase in outgoing activities. The overall mobility score remains the same as last month at -3.

* Axis My India further assessed if advertisement influences consumer’s purchase decisions. Closer to half i.e. 41% agreed that ads are stimulants and thereby drive purchases. This reflects the view of 18-35 YO from northern part of India. However a majority of 57% disagree on the same.

* Gauging consumer’s view on parallel viewing habits, the survey discovered that 26% surf internet while simultaneously watching television. This signifies that not only are people moving between multiple screens on smartphones, tablets, computers and television, but they are also using multiple screens simultaneously to accomplish tasks. This also unravels a stiff competition between the two mediums to hold onto consumer’s attention for engaging them with information/news, entertainment, advertisements etc. 18-25 year olds, majorly reflects this behaviours.

* The CSI – Survey furthermore captured consumer’s financial sentiment across varied facets.  With regards to financial and personal security, a majority of 41% is apprehensive that the information shared online is not secure. Moreover a bulk of 48% believe that the new variant of the virus – Omicron won’t impact their financial well-being.

*Axis My India survey further delved deeper to understand consumer’s opinion on who manages financials/investment decisions better between the two genders. A massive 67% believe that women are better as compared to men when it comes financial/investment management. This reflects the view of western part of India

* Finally, Axis My India was delighted to report that 50% engages in sports/exercise and other health related activities to remain fit and healthy. PM Modi in 2019 had launched the nationwide Fit India Movement to encourage people to remain healthy and fit by including physical activities and sports in their daily lives.

Posted by editor-manu-sharma at 2:55 PM