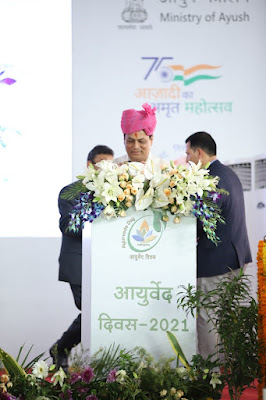 The National Institute of Ayurveda, Jaipur commemorated 6th National Ayurveda Day by hosting a two-day event to encourage the Ayurvedic principles of wellness and healing in alignment with the theme, ‘Ayurveda for Poshan’. The event started with Dhanwantri Poojan. India is striving to become the global centre for traditional medicine and there is increasing collaboration between states and central government to make advancements in field of AYUSH

Speaking as the chief guest of the programme, Union Minister of AYUSH, Shri Sarbanand Sonowal announced release of Rs. 260 crores for expanding the infrastructure of NIA’s satellite centre of Panchkula, Himachal Pradesh

Shri Sarbanand Sonowal, Union Minister of Ayush, Ports, Shipping & Waterways said on the occasion, “Ayurveda can play an important role in raising awareness among the public about the necessity and importance of leading a disease-free, healthy and long life, both physical and mental. The potential of Ayurveda in maintaining a healthy lifestyle and how it can contribute significantly to lower the burden of non-communicable diseases in India is immense. There is an urgent need to raise awareness about the strength of Ayurveda treatment as India has a rich resource for plant-based medicines along with a glorious ancient history of practicing Ayurveda Shashtra. Considering the tremendous achievements of NIA, Ministry of Ayush has decided to expand the infrastructure of NIA at Panchkula and Rs. 260 crores have been released to NIA and it is hoped that NIA will glorify the practice of Ayurveda globally.”

Dr. Munjpara Mahendrabhai Kalubhai, Union Minister of State for Ayush, Women & Child Welfare said, “The Covid pandemic has amply emphasized on the importance of wellness and preventive care to live a healthy life. We need to focus showcasing the tremendous potential of Ayurveda to the world. Today, many first world countries are also looking up to Ayurveda for treatment and cure. The current generation should uphold the Ayurveda principle of diet to lead a disease-free, healthy lifestyle.”

Dr. Raghu Sharma, Rajasthan’s Minister for Medical Education, Health and Indian Systems of Medicine said, “Ayurveda is integral to Rajasthan and it's culture. We have been practicing it for ages. This year's theme, Ayurveda for Poshan couldn't be more relevant to address the issue of malnutrition and sedentary lifestyle induced NCDs. The theme should resonate across the country to bring about a change in people's lives and for this we should strengthen the research in this field.” Hon'ble minster also reassured that the state government of Rajasthan will extend all help to National Institute of Ayurveda to build and strengthen capacities and resources and continue the path to make Rajasthan a global attraction in the field of Ayurveda.

Shri Ramcharan Bohra, Member of Parliament from Jaipur City, said “Rajasthan needs a special recognition in practicing Ayurveda under Ayushman Bharat and National Institute of Ayurveda will lead the field of Ayurveda research”.

Vaidya Rajesh Kotecha, Secretary, Ministry of Ayush said, “Centre of Excellences under AYUSH has been doing pathbreaking work. The importance of same has been reflected across the country with inclusion of Ayurveda as part of Biology subject in JNU also. We also witnessed the release of important documents and films. It is hoped that this event will benefit the public in maintaining their health and well-being. We are committed to our mission in establishing Ayurveda as one of the most reliable and effective form of treatments in treating non-communicable diseases as well."

Prof. Sanjeev Sharma, Director and Vice-Chancellor of National Institute of Ayurveda said, “We are really happy and proud to be able to successfully organize the events celebrating the 6th National Ayurveda Day. National Institute of Ayurveda, Jaipur organized this two-day event with gaiety and enthusiasm and the series of insightful initiatives were attended and well appreciated by the Ministers, Policy Makers, Administrators, Scholars not only from Ayurveda but from other fields as well.”

The event saw the release of Ayurveda Swasthya Samiksha, a handbook containing daily routines; Ayurveda for Poshan, a booklet; NIA Nutri Cookies suitable for children and adults; digitized versions of three rare publications: the Charaka Samhita with Charaka-Nyasa commentary of Acharya Bhattar Harichandra & Charak-Panjika of Acharya Swamikumar; Charaka Samhita with Charaka Pradipika commentary written in the early 20th Century by Acharya Jyotish Chandra Saraswati  and Chakradutta with Ratnaprabha of Nishchala Kar and Tattvachadrika. In addition, a special manuscript website portal was launched along with short videos, CCRAS publications and films on the occasion. A Memorandum of Understanding was signed between Mahavir Jaipuriya Hospital and National Institute of Ayurveda for research in patient care. The event was also attended by students of Ayurveda from 15 countries.

The other guests present at the event were Advisor to AYUSH, Vaidya Shri Manoj Nesari; Special Secretary Pramod Kumar Pathak along with DGs and head of institutes of AYUSH ministry.