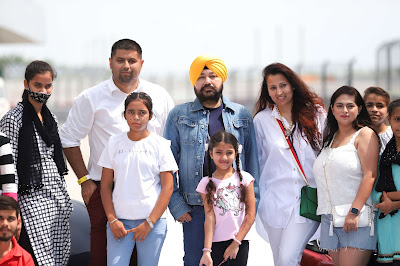 Boys and Machines, a premier dealership specialising in pre-owned luxury cars in association with Chintan Environmental Research and Action Group launched their #MakeAWish video campaign across social media to celebrate the 75th anniversary of India's Independence, with a difference.

The Boys and Machines team decided to make the dreams of some of India’s young kids come alive. On the eve of Independence Day, they invited 10 teenagers from Chintan Environmental Research and Action Group, to enjoy a special Ferrari joyride at the Buddh Circuit, Delhi-NCR. The NGO supports livelihoods and fights poverty, as a tool that empowers women and children.

To add an element of surprise, Boys and Machines also invited the King of Pop, Daler Mehndi as the guest of honour at the event and the youngsters were excited to meet him. The singer, along with Siddharth Chaturvedi, founder and MD of Boys and Machines, took the teens for a fun drive in the Ferrari. They also interacted with the kids on all things cars, their future aspirations and more.

Talking about the thought behind this initiative, Mr. Siddharth Chaturvedi, Founder & Managing Director, Boys and Machines shared, “We wanted to commemorate Independence Day by fulfilling a simple wish these kids had. I believe even the smallest of gestures can bring a smile to someone’s face. Through this activity, we wanted to encourage people to take the pledge of making someone else's wish come true, in whatever way they can. The occasion was also energised by the presence of Daler Paaji, who is an inspiration to all young people. His presence has been extremely encouraging.”

Daler Mehndi said, “I am delighted to be part of this campaign by Boys and Machines. Just the very thought of spending a day with these kids and bringing a smile to their faces was what made me associate with it. This is indeed a noble gesture on the part of Siddharth and team to spend this Independence Day with them. And, I wish these kids all the success and luck and may their aspirations come true.”

Ikjot Singh Bhasin, a motorsport catalyst, Times award jury member, and superbike consultant  was a key part of the event. He also actively engaged with the children and encouraged them to participate in motor sports from an early age.

Boys and Machines was founded in 2020. It currently has a presence in Mumbai, Delhi NCR, Hyderabad and Kolkata. The company exclusively buys and retails luxury cars. Its portfolio includes cars from some of the most sought-after automotive brands like Ferrari, Bentley, Porsche, Mercedes, Audi, Lamborghini and BMW.

With demand for pre-owned sports cars only growing, the company is focussed on growing its presence across India and beyond the traditional sports car markets of Mumbai and New Delhi. Its aim is to expand its network to eight cities by the end of 2021.

Posted by editor-manu-sharma at 6:23 PM