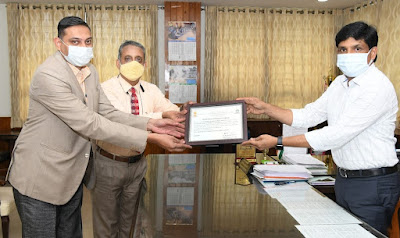 MGNCRE has recognized MAHE as one of the Exemplary Performers in the Swachhta Action Plan (SAP) Green Campus Initiative. The District Commissioner, Udupi District, presented a certificate to MAHE certifying that MAHE is this year’s District Green Champion. MAHE’s contribution to the field of Swachhta aspects was well appreciated. The various initiatives undertaken on the campus towards sustainable development, the policies related to the environment, efficient campus management concerning waste, water, and energy helped achieve this title. A workshop was organized by MGNCRE on 17th August online where an exchange of ideas between institutions of the district was conducted culminating in the certificate presentation and MAHE was honored with the title of “ District Green Champion”.

MGNCRE had conducted online workshops where the areas of knowledge sharing in aspects of Swachhta in Campus, Campus Jal Shakti (Water Conservation in the Campus), and Campus-Post Covid 19 Sanitation Plan. Subsequently, a Swachhta Action Plan (SAP) Committee was constituted at MAHE and Swachhta Activities were conducted thus becoming a Swachh Institution. Further, as per the directives of the Ministry of Education, MGNCRE wanted to recognize Institutions for Contribution to Swachhta Education and Practice and conceptualized the 'One District One Green Champion' Awards. MAHE qualified to be part of this Contest given the Swachhta initiatives of the SAP Committee.

The Mahatma Gandhi National Council for Rural Education Department of Higher Education, MoE, GoI, was established in 1995 by the Government of India under the Union Ministry of Human Resource Development. The MGNCRE, founded by the Late Prime Minister Shri P V Narasimha Rao, seeks to usher in rural change and inclusive growth as a catalyst organization. The MGNCRE interfaces with rural institutes of higher learning like Rural Universities, Rural Development Institutes, National Rural Livelihoods missions, and State Livelihood Action Units.