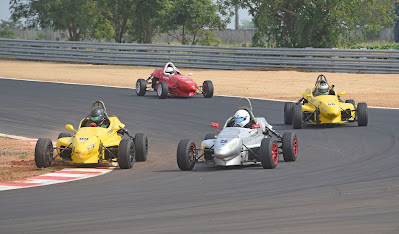 The Kari Motor Speedway, situated on the outskirts of Coimbatore amidst sylvan surrounding, will roar to life as participants gear up for the final round of country’s premium motor racing event- the 23rd JK Tyre FMSCI National Racing Championship.

After the grand success of the first two rounds of races held in December 2020 at the same venue, this weekend -- January 21 to 24 -- again promises rich action.  Six races in each category of Formula LGB 4 and Novice Cup will be held during the finale weekend. Chennai's Ashwin Datta of Dark Don Racing grabbed the limelight in December in the Formula LGB4 category with his consistent racing.

The unsung Amir Sayed from Kottayam of MSport, demonstrated his stellar form in the Novice category. The youngster took a likening to the renovated Kari Motor Speedway in quick time and was able to handle the twists and turns to a nicety. The stakes are higher and so is the determination of the racers as they race for the coveted National Champion title.

Adding on to the on-track excitement will be country’s finest women racers who will be in tow to give some tough competition to the men in the grid. In the last outing, Mira Erda of MSport was adjudged the best female racer. Meanwhile, in the Novice category, Anushriya Gulati of Ahura Racing emerged as the noticeable winner.

As per the provisional standings, in the Formula LGB4 category, Ashwin Datta with 39 points goes into the final as leader. Chennai lad Raghul Rangasamy of MSport with 32 points closely follows him with his teammate Vishnu Prasad at 30 points. In the overall team category, Dark Don Racing heads the standings with 80 points, followed by MSport at 74 & Ahura Racing at 29.

Amir, with 60 points, has a comfortable lead in the Novice Cup category. He is followed by DTS Racing’s Dhruvin Gajjar from Rajasthan with 34 points. Closing in in the third place is Kolkata boy Aman Chaudhary representing DTS Racing with 24 points. Team MSport leads the points table with 77 points with DTS Racing and Momentum Motorsport in the second and third place with 59 & 50 points respectively.

In the rookie category in Formula LGB 4, Viswas Jayaraj from Nellore representing Avalanche Racing with 44 points, is the leader. At 35 points, Anushriya- Gulati from Dehradun is placed second. With just one point behind, Chirag Ghorpade of Bangalore from Team Momentum Motorsport is placed third at 34 points. The weekend will decide if Anushriya is able to maintain her lead over Chirag.

In the year gone by, when Covid-19 pandemic took a toll on sport at home (India), the JK Racing event has placed a premium on following all the rules and regulations. From thermal checking to sanitizing the pits regularly and use of hand sanitizers and masks, all steps will again be taking for the safe conduct.

The race programme starts on Friday and will culminate with the finale on Sunday.

Speaking about the JK Tyre FMSCI National Racing Championship, Sanjay Sharma, Head, Motorsports, JK Tyre said, “We feel proud that despite the pandemic, which put the world at halt, we at JK Tyre were able to maintain the continuity of India’s longest running racing championship without compromising on the safety protocols set by the Government and State authorities. And this is all with the support of our participants, patrons, officials, technicians who worked together to make this happen.”

“With some seasoned racers on the track, it would be a sight to watch the final round go down to the wire as we will get our National Champions for 2020,” he further added.

JK Tyre has been closely associated with the world of motorsports for almost three decades back. The company laid down a long term plan to popularise and promote the sport in the country. Its first target was to change the notion that this was a sport for the elite. So it packaged and redesigned it in a spectator-friendly way, drawing the masses to the sport.

The company then endeavored to spot, nurture and sharpen the drivers to turn them into world champions. With this goal in mind, we conceptualized the JK Tyre National Racing Champion in 1997. Our efforts started paying dividends in just a few years’ time, with the likes of Narain Karthikeyan and Karun Chandok going all the way to the F1 rung, the highest level of single-seat racing in the world. Since then, a number of stars emerged, including Armaan Ebrahim, the Maini brothers (Kush and Arjun), Anindith Reddy Konda, amongst many others.

Before all this, JK Tyre had a successful stint in rallying too, conquering the scene in the early 90s. At the same time, gradually, we moved on to various disciplines, including cross-country rallying and off-roading, leaving a mark in each of them with their unique and innovative ways.

JK Tyre Motorsports is also very proud of the role it has played in bringing women into motorsports in a big way. Apart from encouraging them to get into the sport through karting as kids, we also gave them opportunities in various national championships. Last year was particularly rewarding for us as an All-Women Racing team was introduced for the first time in the LGB 4 category. In addition, the company also undertook various other initiatives to encourage them to try motorsports, even if for fun to begin with.

To supplement JK Tyre’s entry into the two-wheeler market, the JKNRC hosted the Suzuki Gixxer Cup and the Red Bull Road to Rookies Cup categories and saw enthusiastic participation from across the country.

Today, the company is synonymous with motorsports, and even more so with racing, creating a lot of goodwill for the brand. Right from budding racers to accomplished drivers in the country, everybody owes their rise and success to JK Tyre.

Posted by editor-manu-sharma at 2:18 PM