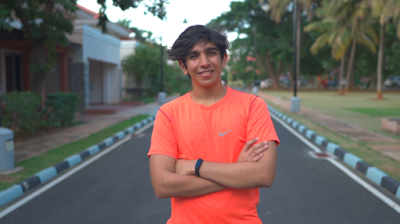 Bharat Ke Mahaveer, a three-part series launched by United Nations in India and NITI Aayog, in partnership with Discovery channel, and presented by Dia Mirza and Sonu Sood, features 12 champions from across India who have gone out of their way to help those in need during the COVID19 pandemic.

Rohan Ray and Akash Raghavan are amongst the 10 stories of kindness that have been recognized on Bharat Ke Mahaveer. The duo, being staunch sports enthusiasts, started a virtual COVID Fit Club, engaging children in core strengthening, weight training and cardio workouts, while also helping them learn some fun dance moves. Collecting funds in the form of fee from children, Akash and Rohan donated 100 percent of the money raised towards Mitti Café- an NGO that employs physically and mentally challenged people to cook, as well as maintain food joints. The café, along with its staff, is using the money to feed migrant labourers as part of its COVID hunger campaign.

Rohan Ray said, “At a time when everything is closed and the only thing to do is stay indoors, a sense of fatigue kicks into people due to lack of activity. While teaching a new skill to children and doing what we love, we got a chance to help a cafe that is run by physically and mentally challenged people. What touched us is that the act of kindness has been carried forward by the restaurant, where they provided meals to migrants.” Akash Raghavan added, “We are indeed very happy that our efforts resulted in passing the good vibes forward.”

UN Secretary-General’s SDG Advocate Dia Mirza said, ““Isn’t it amazing how one person stands up and ends up sparking off a movement? All our Mahaveers have such inspiring stories. They found the courage to begin alone and soon, many others joined in; they tackled all limitations – resources, personal ability, they are the warriors who created a chain of goodwill, inspiring the entire country.”

Another such act of kindness showcased in the series is by the Bengaluru based National Law School (NLS) alumni association, which chartered flight for 160 migrant workers and 5 children to reach Jharkhand. This initiative was a joint effort by the NLS and IIT Bombay.

A member of the Aahan Vaahan team among Alumni from National Law School, Bengaluru said, “A lot of migrant workers were stuck during the lockdown and didn’t even have the means to survive in the cities they otherwise worked in.  As soon as domestic flight operations resumed in India, we took the initiative to charter an Air Asia plane from Mumbai and help these migrant workers to reach their homes in Jharkhand. We ended up operating 10 flights in total to over 6 cities. It was a small thing given the scale of the problem but we were glad to have been able to help those we could.”

Other notable stories featured in Bharat Ke Mahaveer are of 12 year old Ridhi who raised over 11 lakh and supplied over 2,000 ration-kits during the pandemic through her Project Care-ona, 85 year old Saroja Sundararajan, a Math teacher who sold creative mathematics worksheets to donate INR 2 lakh to the PM Care's Fund, Srini Swaminathan, who provided over 1 lakh 45 thousand care packages to migrant workers returning to their hometowns in Shramik trains, Inder Singh Yadav , a railway police officer who sprinted behind a moving train to provide milk for an infant. It also features Langar on Wheels, an initiative by  Delhi Sikh Gurdwara Management Committee, which continues to feed 1 lakh people living on streets, daily, Pune’s Akshay Kothawale, an auto driver, spent Rs. 2 lakhs from his wedding funds to feed migrant workers. The show features transgender rights activist Laxmi Narayan Tripathi who has been distributing 200 meals every day since May 2020 for the community; Raji Radhakrishnan, a 31 year old girl with disability, who stitched more than 2000 masks for frontline workers and Baba Karnail Singh Khaira, who fed over 2 million people, free of cost, through his roadside eatery on NH-7, Maharashtra. Bharat Ke Mahaveer also features a heartwarming story from one of India’s aspirational districts Mewat, Haryana, where a community radio station – managed entirely by locals - is raising awareness about COVID-19 while ensuring children continue to learn.

Bharat Ke Mahaveer airs on Discovery and Discovery HD Channels, every Friday. Viewers can also stream the show on Discovery Plus app.

Bharat Ke Mahaveer is a television programme and not a contest, and the 12 stories are representative of the spirit of solidarity and unity in the country.