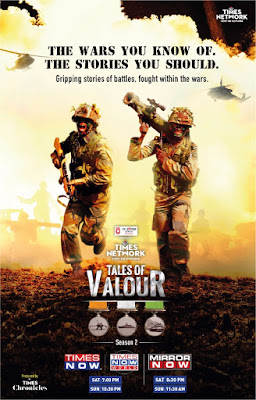 Following a resounding success of the first season of ‘Tales of Valour’, an authoritative factual documentary series which presented the valiant stories of bravery by the Indian soldiers, Times Network, India’s premium broadcast Network, announces the second season of the docu-series. Featuring 13 exemplary heroic tales from the crucial battles India has fought since independence, Tales of Valour Season 2 chronicles the heroic stories of resilience and sacrifice of Indian soldiers.  Curated and narrated by Maroof Raza, Consulting Editor, Times Network and one of India’s foremost military historian and strategic affairs expert, the 13-part series will telecast from November 28, 2020, Saturday at 7.00 pm & Sunday at 10.30 pm on TIMES NOW & TIMES NOW WORLD and Saturday at 8.30 pm & Sunday at 11:30 am on Mirror NOW.

Presenting a well-researched account of the crucial battles, the docu-series will bring a clear picture on the military history of independent India. Visually recreating the historic scenarios and circumstances using animation, Tales of Valour Season 2 captures actual locations of the battles, war memorials, reels of unseen archival footages and pictures of the wars. This includes footage of 7CAV tanks on the Zozila pass and images of the terrain and Jaswantgarh Memorial dedicated to the Battle of Nuranang, 17th Infantry Division Unit War log book from the Nathu La and Cho La clashes, audio of Air Vice Marshal Chandan Singh, who was instrumental in helicopter operations of 1971 Liberation War of Bangladesh, narrating the events and much more.

Featuring the brave tales of valour of Indian Army, Indian Navy and Indian Air Force officers, the documentary offers a glimpse into the mindsets and emotions of the times with anecdotes from senior officers, military historians and first person accounts including Brig Brar from 4 Dogra, who fought in Battle at Trijunction, Maj Gen PL Kher, who fought with the Chinese at the Gurung Hill, Brig Ravi Malhotra & Brig Jasbir Singh of Hodson's Horse,  Lt Gen Ajai Singh of 17 Poona Horse, eye witness account by Col Attar Singh on Nathu La clash and the interviews of the veterans who participated in Navy Operation Trident (1971) as young officers.

A historically important and an essential viewing for every Indian citizen to understand and learn the supreme sacrifices made by the soldiers for our country, the documentary will shine light on battles such as Defence of Poonch and Zozilla (1948), Battle of Tithwal & Richhmar Gali (1948), Battle of Nuranang (1962) and Battle of Phillora & Chawinda (1965) amongst others.

TIMES NETWORK, a premium broadcast network is part of India’s largest media conglomerate, The Times Group. Times Network with its credo Now or Nothing takes the centre stage of influencing the influencer, by delivering the most compelling and irreplaceable content to over 100 million urban affluent viewers in India and is available in over 100 countries across the globe. It houses best in class News, Hollywood and Bollywood brands including; TIMES NOW – India’s No. 1 English News channel, ET NOW - India’s leading English Business News channel, MIRROR NOW  -  the channel that Fights for ‘You’ and channelizes its focus on issues that impact people’s lives; MOVIES NOW and MOVIES NOW HD – Home to Superheroes and India’s destination for Hollywood Blockbusters; MN+ – The Gold class of Hollywood; Romedy NOW and Romedy NOW HD – a unique destination for Love. Laugh and Live; MNX and MNX HD – Hollywood’s wild child, Zoom - India’s leading entertainment destination for music, Bollywood news, trends, lifestyle and fashion  and The Zoom Studios – original content creator that brings stories to life with relatable and compelling narratives.Timesnownews.com, the digital entity of the Network, has seamlessly adapted itself to serve the diverse nature and interests of the content-savvy internet audience.

Posted by editor-manu-sharma at 3:35 PM