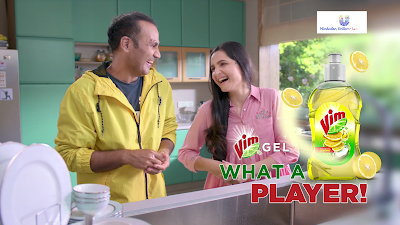 * Based on lockdown-led impetus that saw male participation in household chores; empathy to sustain

Dishwashing category creator and current market leader, Vim by Hindustan Unilever Ltd. launched #VimWhatAPlayer campaign that aims to “unstereotype” dishwashing. Seeped from the COVID-led impetus of male participation in household chores, that further got a big fillip with the nationwide lockdown, the brand took this as an opportunity to break the age-old stereotype around dishwashing with this campaign.

To the men who were actively helping in the chore, but were newly discovering the pain points of dishwashing, the campaign communicates the functional benefits of the product and how it makes the dishwashing chore easy. To further bolster this message amongst men, the campaign will be aired throughout the current IPL season. The brand has roped in ace cricketer, Virender Sehwag as the protagonist in this pioneering campaign, who would exhibit how perfectly easy it is to overcome any dishwashing challenge with Vim Liquid. A flavour of IPL was added by having Sehwag wash dishes while renowned IPL commentator, Danny Morrison’s cricket commentary ran in the background. Featuring a creative juxtaposition of cricket commentary lines over mundane dishwashing, the TVC efficiently highlights the brand’s positioning.

Speaking on the campaign, Prabha Narasimhan, Executive Director and VP, Home Care, Hindustan Unilever Ltd. said, “Dishwashing in India as a chore has traditionally been distributed inequitably amongst the family. Barring a small proportion of households that employ external help for the task, the chore is predominantly done by, and unfortunately seen as the homemaker’s job. While things are changing slowly, our study shows that the current pandemic and the subsequent lockdowns across India gave a much-needed boost to equality amongst gender when it comes to participation in such chores. Stemming from this insight and in consensus with our global #UNSTEREOTYPE movement is the campaign #VimWhatAPlayer. Being an industry leader, we are committed to contribute to positive cultural change as well as making better connections with people through our advertising.”

Commenting on the TVC, SunetroLahiri, Associate VP-Creative, Glitch Media Pvt. Ltd.shared,“One of the few positive things to have come out of a rather gruelling lockdown has been the widespread realisation of the pure lack of gender equity when it comes to the distribution of home chores. From a creative rendition point-of-view, our aim was never to create a narrative where one is applauded for doing what’s ostensibly a life skill… rather, we wanted to normalise this activity to a point where it gets hammered time and again as second nature. And who better to hammer to down to the pavilion than Sehwag, himself.”

Link to the 4 films is below:

Launched in 1993, Vim was the original hand dishwashing brand that created the category and is the market leader in the dishwashing segment.Vim was the first brand to introduce Dishwash gel in India in 2005 and has been the leader in the segment. Vim gel, with the power of 100 lemons, gives you complete cleaning without leaving any residue. It is also great value for money with one spoon of Vim gel being enough to clean a full sink of dirty utensils. Its superior fragrance leaves your utensils smelling fresh, while its pH neutral formula is gentle on your hands.

Hindustan Unilever Limited (HUL) is India's largest Fast Moving Consumer Goods company with a heritage of over 80 years in India. On any given day, nine out of ten Indian households use our products to feel good, look good and get more out of life – giving us a unique opportunity to build a brighter future.

Posted by editor-manu-sharma at 7:13 PM