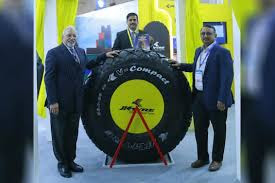 Indian Tyre Industry major, JK Tyre & Industries Ltd. (JK Tyre) today announced its results for the second Quarter of the current financial year.  On a consolidated basis, it recorded a Sale of Rs.2290 Crores, while Operating Profit was Rs.368 Crores and the Profit before Tax was Rs.167 crores.

Commenting on the results, Dr. Raghupati Singhania, Chairman and Managing Director of the Company said, “JK Tyre achieved higher sales on the back of economic recovery, more so in the automotive sector, which has taken place during the quarter. The Company was well positioned to take benefit of this emerging opportunity, and as a matter of fact, it could achieve healthy sales in the replacement market, doing better than the industry.  The renewed thrust on exports resulted in higher Export Sales of Rs. 337 Crores during the quarter.”

Dr Singhania added that “Profitability improved significantly due to aggressive cost cutting, more particularly Fixed costs. The Company could achieve savings in interest costs due to its ability to reduce its working capital requirements.”

The Board of Directors has appointed Mr. Anshuman Singhania as Managing Director of JK Tyre & Industries effective 21st October, 2020.  Mr. Anshuman joined the Company as an Executive and over the years has been deeply involved in various activities of the Company in different positions, current being Dy. Managing Director.  During this period, he has demonstrated leadership and vision under the mentorship of Dr. Raghupati Singhania, CMD and the Board.

Dr Singhania concluded, that he expects the Indian economy to sustain its growth momentum in the coming quarters as well.

The flagship company of JK Organisation, JK Tyre & Industries Ltd is amongst the top 25 manufacturers in the world. Pioneers of radial technology, the Company produced the first radial tyre in 1977 and is currently the market leader in Truck Bus Radial segment. The Company provides end-to-end solutions across segments of passenger vehicles, commercial vehicles, farming, Off-the-Road and two & three-wheelers.

A global force, JK Tyre is present in 105 countries with over 180 Global distributors.  The Company has 12 globally benchmarked ‘sustainable’ manufacturing facilities - 9 in India and 3 in Mexico – that collectively produce around 35 million tyres annually. The Company also has a strong network of over 4000 dealers and 550+ dedicated Brand shops called as Steel Wheels and Xpress Wheels.

JK Tyre’s unwavering commitment towards innovation is reflected through its state-of-the-art global research and technology centre – the Raghupati Singhania Centre of Excellence - in Mysore, which houses some of the world’s finest technologies and techniques.

It is the only Indian tyre manufacturer to be included in the list of Superbrands India in 2019 for the seventh consecutive year. JK Tyre has been conferred the Sword of Honour for Safety across its plants by the British Safety Council, UK. The company entered the Limca Book of Records with the country’s largest off-the-road tyre - VEM 04.

JK Tyre is also synonymous with motorsport in the country. For over three decades, the Company has relentlessly worked towards shaping India’s positioning as the motorsport hub of Asia, developing the right infrastructure for the sport and promoting young talent in the arena.

Posted by editor-manu-sharma at 9:47 AM