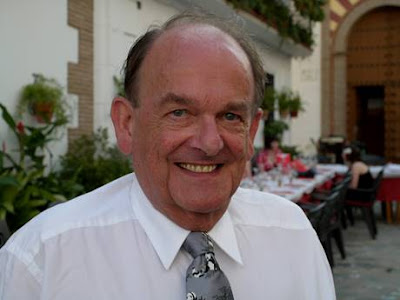 Doug Jack, the widely respected bus and coach industry consultant, has died aged 78. He passed away peacefully in the early hours of Wednesday, September 2 after a short illness.

Doug’s passion for the bus and coach industry began at an early age and remained with him throughout his life. He was a familiar face at bus and coach exhibitions all around the world and his knowledge was considered unrivalled by many. As news of his passing spread, one word kept recurring in the online tributes - ‘icon’.

Having graduated from Edinburgh University with a degree in Scots Law, he joined Leyland Motors in 1966. After practical training on the shop floor in various departments, he became Legal Advisor of British Leyland Truck & Bus Division on its formation in 1968 and Company Secretary in 1971. An enthusiastic traveller, he became Export Sales Manager in 1975.

Doug subsequently became Sales Marketing Director for Duple Coach Builders where he introduced a more modern range of products. As Managing Director for Salvador Caetano (UK), he later established a UK subsidiary for the Portuguese bodybuilder.

Having gained a wide and almost unique experience in the bus and coach industry, Doug recognised the need for a specialist consultancy to advise and assist the manufacturing industry. Transport Resources International (TRI) was established in 1986.

Doug is survived by his two sons, Robert (a transport journalist and publisher) and James (international business).

The funeral will take place in Northampton on Wednesday, 23rd September. If you wish to attend, in person or online, please contact Robert Jack at robert.jack@passengertransport.co.uk.

The family have requested no flowers and instead asked for donations to be made in Doug’s memory to the International Committee of the Red Cross (ICRC), a charity which reflects his very international focus.

Born in 1941 and raised in Dunfermline, Fife, Doug’s teenage interest in buses was fostered by Jack Rennie (senior), who owned bus and coach operator Rennies of Dunfermline Ltd (now part of Stagecoach). Within days of his twenty-first birthday he had gained a PSV licence.

Doug graduated from Edinburgh University with a degree in Scots Law, following in the footsteps of his father, but he quickly realised he was much happier in the bus and truck business. So in 1966 he made a bold move and joined Leyland Motors, which was in its heyday as a major international force.

As a graduate trainee, Doug’s first year with Leyland Motors was spent in the various departments, one month at a time, learning how to build trucks and buses, and all about their main component parts. This gave him very valuable engineering experience.

Following the merger of the Leyland Motor Corporation and British Motor Holdings in 1968, Doug became Legal Advisor of British Leyland Truck & Bus Division. He became the division’s Company Secretary in 1971 before he was thirty years old, an unusual event in those days.

He became increasingly involved in major export licensing and sales agreements, especially in Spain, Morocco and Turkey, and was, in his own words, easily persuaded to become Export Sales Manager of the Truck and Bus Division in 1975; then Export Sales Director of the Passenger Vehicle Division in 1978 (ie. buses and coaches), and finally Regional Director for the Middle East and North Africa in 1979 (with responsibility for trucks and buses).

These roles required Doug to travel globally to meet first hand with customers, governments, banks and corporations. Even with this heavy responsibility he still found time to keep close to his first interest - the product. He would regularly take test drives in deckers, coaches and HGVs, learning everything he could.

He also found time to write the comprehensive history of Leyland Motors. Published in 1977, ‘The Leyland Bus’ is a magnificent illustrated work, as comprehensive and international as Leyland itself.

Doug subsequently became Sales Marketing Director for Duple Coach Builders from 1981 to 1983, introducing a new and more modern range of products to the market before he was appointed as Managing Director for Salvador Caetano (UK) whereupon he established a British subsidiary for the Portuguese bodybuilder.

Having gained a wide and almost unique experience in the bus, coach and truck industry, Doug recognised the need for a specialist consultancy to advise and assist the manufacturing industry. As a consequence he established Transport Resources International (TRI) in 1986 to apply his accumulated specialist knowledge towards services for commercial vehicle manufacturers. From the mid-1990s the business concentrated exclusively on the worldwide bus and coach industry, for manufacturers and major component suppliers.

TRI became a limited company in June 2006 and has worked with many regular clients in the manufacturing and component industries from more than twenty countries worldwide.

He was also a regular contributor to industry journals, including Bus & Coach Buyer in the UK and BUSRide in the USA.

Alexander (Sandy) Glennie, the former Managing Director of Volvo Bus Ltd, was a close friend. He first met Doug in 1980 at the Brighton Rally when he was with Duple and was struck by his knowledge and enthusiasm for the total industry.

Reflecting on Doug, Sandy commented: “Doug was a true and trusted friend and a dedicated man. He will be remembered as a genuine people person.

“He had a wicked sense of humour and used to recount many tales of his experiences in such places as New York, Turkey, Shanghai, Falkirk and even Iran.”

“He knew everyone in the greater industry from the biggest manufacturers, to EU and government agencies to component suppliers and research institutes.

“He was a regular visitor at the international exhibitions and was welcomed on all stands. He was confident and relaxed with all industry members from international chairmen to family coach operators.”

“Doug was a grafter and retirement was not in his vocabulary working to the end.”

Luc Glorieux - He was a great specialist and a great friend

“Each time I was in need of advice, He was there for me, ready and offering the good and right counsel. I will always remember him as a great friend.”

Posted by editor-manu-sharma at 6:23 PM