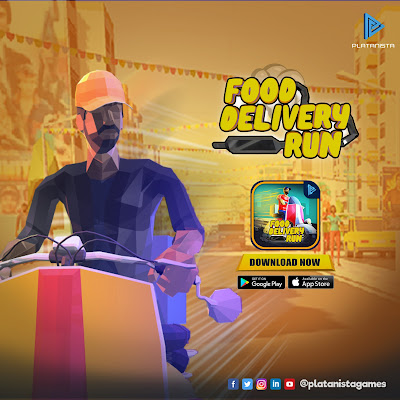 When it comes to food, everyone likes their meals to be hot, tasty, and served on time! With a growing number of food delivery apps in the market, there are fewer hungry customers worrying about the delivery of their meals. Inspired by the thrilling journey of food delivery riders, Platanista Games, a gaming studio by IN10 Media Network, announces the launch of ‘Food Delivery Run’ a 3D casual game for mobile devices.

Link to the trailer – https://www.youtube.com/watch?v=EVT2auwPgPI&feature=youtu.be

Food Delivery Run is a 3D casual game where the player gets to be a delivery boy. The mission is to fight through the city traffic, overcome various obstacles and challenges, and successfully deliver food to hungry customers. Features like ‘Speed Boost’, allows players to run at supersonic speed; ‘Multiplier’, doubles the player’s score and cash on delivery; and ‘Super Delivery’, let’s the player deliver the food in every lane of the city. The game also allows players to customize characters for the gameplay as well as collect and redeem in-game cash to unlock super vehicles from the shop for an enhanced experience.

Commenting about the launch, Mansi Darbar, Vice President - Corporate Strategy and Development, IN10 Media Network, says, “The rapid digitization of the food delivery industry is undoubtedly one of the most fascinating innovations and its market is booming at lightning speed, especially in current times. It’s the amalgamation of technology and a universal concept of delivery that inspired us to create Food Delivery Run, giving a fun peek into the world of riders. With Food Delivery Run, Platanista Games reaffirms its commitment to provide captivating gaming experience for a broad range of players.”

With an aim to create universal-appealing and immersive gaming experiences across all demographics, Platanista Games has launched several interactive, casual games in a short span. The first game by the studio was ‘Surgical Strike – Border Escape’, a multilingual (English, Hindi & Marathi) 3D endless shooting game, followed by ‘Super Keeper’, another multilingual (English, Hindi, Marathi & Tamil) 3D casual sports game wherein the player gets to play the role of their favourite wicket-keeper and recently launched ‘Space Finder’, an endless casual game offering space travel to players for iOS and Android users.